WIN THE FLASH: THE COMPLETE THIRD SEASON ON BLU-RAY™ - OUT ON BLU-RAY™ AND DVD SEPTEMBER 4 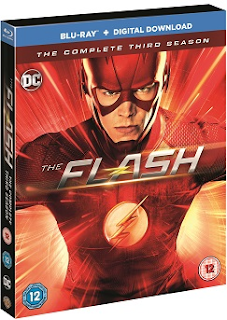 Prepare your staring blocks as Barry Allen is back and zooming into homes soon as The Flash: The Complete Third Season comes to Blu-ray™ and DVD September 4. To celebrate the release we’re giving you the chance to win a copy on Blu-ray™!

Struck by the supercharged fallout of a particle accelerator explosion, forensic scientist Barry Allen (Grant Gustin) becomes the fastest man alive:  The Flash!  With his newfound time-warping speed and help from the S.T.A.R. Labs team – Caitlin Snow, Cisco Ramon and Harrison Wells – and his adoptive family, Detective Joe West and Joe’s daughter Iris, the Scarlet Speedster runs circles around other metahumans set on wreaking havoc in Central City, while traveling between alternate universes and protecting our world from otherworldly threats.  Last season, new dangers arrived from a parallel earth known as Earth-2, under the direction of an evil speedster named Zoom.  In Season Three, Barry faces the unknown – as he irrevocably alters the timeline by saving his mother from the clutches of the Reverse-Flash.   The only question now is – as he wrestles with the consequences of his own Flashpoint Paradox, including the wrathful Speed God Savitar – will he be able to find a way out?

Own THE FLASH: THE COMPLETE THIRD SEASON on Blu-ray™ and DVD September 4
For further information on The Flash visit https://www.facebook.com/warnerbrosuk/ or follow @WarnerBrosUK

Terms and conditions
1. Closing date 11-09-17
2. No alternative prize is available
3. When the competition ends as indicated on this page, any and all entries received after this point will not count and emails blacklisted due to not checking this page first.
4. Winners will be chosen randomly and will be informed via email.
Posted by JD at 23:30