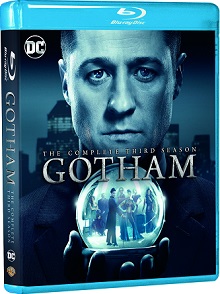 Villains take centre stage as Gotham: The Complete Third Season, comes to Blu-ray™ and DVD August 28. Gotham features a star-studded cast including Ben McKenzie (Southland, The O.C.) as Jim Gordon, Donal Logue (Vikings, Sons of Anarchy) as Detective Harvey Bullock and David Mazouz (Touch) as the young Bruce Wayne. To celebrate the release we’re giving you the chance to win a copy on Blu-ray™!

The power struggle in Gotham is more contentious than ever, as DC Super-Villains even more ambitious and depraved are introduced and a realignment of alliances could change the future of Gotham forever.

With the Indian Hill fugitives on the loose, Jim Gordon takes matters into his own hands as a bounty hunter whilst Gotham City Police Department’s Bullock and Barnes remain on the frontline in Gotham, fighting against crime and destruction in the monster-ridden city as it descends further and further into chaos and darkness when the world’s most infamous DC Super-Villains wreak havoc on Gotham. All the while, a young Bruce Wayne discovers that there are still more secrets behind his parents’ murder as he peels back the curtain on the infamous criminal organization known as the Court of Owls.

You can also buy Gotham Season 3 using the link below
Amazon - Gotham: The Complete Third Season [Blu-ray] - (Link opens in a new window)

1) Who plays the young Bruce Wayne?

Send you name, address and of course the answer to competition@jonn.co.uk

Own GOTHAM: THE COMPLETE THIRD SEASON on Blu-ray™ and DVD August 28

Terms and conditions
1. Closing date 04-09-17
2. No alternative prize is available
3. When the competition ends as indicated on this page, any and all entries received after this point will not count and emails blacklisted due to not checking this page first.
4. Winners will be chosen randomly and will be informed via email.
Posted by JD at 15:57

Email ThisBlogThis!Share to TwitterShare to FacebookShare to Pinterest
Labels: GOTHAM