WIN AN INCONVENIENT SEQUEL: TRUTH TO POWER ON DVD – AVAILABLE ON DIGITAL AND DVD DECEMBER 11 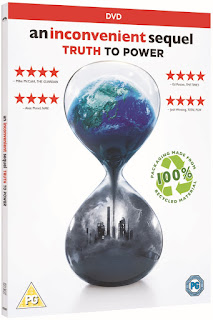 Hailed as “a wake-up-call” (Frankie Crossley, Miro Magazine) and “skillfully put together” (Geoffrey Macnab, The Independent), the eye-opening and compelling AN INCONVENIENT SEQUEL: TRUTH TO POWER arrives on Digital Download and DVD December 11th. To celebrate the release, we are giving you the chance to win a copy on DVD!

Ten years after the Academy Award®-winning An Inconvenient Truth brought climate change to the forefront of mainstream culture, the 2017 Environmental Media Association (EMA) Award-winning documentary AN INCONVENIENT SEQUEL: TRUTH TO POWER follows former Vice President Al Gore as he continues his tireless fight, traveling around the globe to educate and inspire the next generation of climate champions.  This “daring, urgent and exhilarating follow-up” (Josh Dickey, Mashable) shows that while the stakes have never been higher, the solutions to the climate crisis are still within our reach.

An Inconvenient Sequel: Truth to Power - See It on Digital and DVD December 11

Terms and conditions
1. Closing date 18-12-17
2. No alternative prize is available
3. When the competition ends as indicated on this page, any and all entries received after this point will not count and emails blacklisted due to not checking this page first.
4. Winners will be chosen randomly and will be informed via email.
Posted by JD at 12:22

Email ThisBlogThis!Share to TwitterShare to FacebookShare to Pinterest
Labels: An Inconvenient Sequel