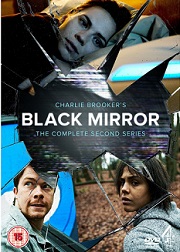 To celebrate the release of Charlie Brooker's Black Mirror - Series 2 out on May 6th, we have a great competition for you, and 2 copies on DVD to give away!

Synopsis:
Be Right Back
Martha and Ash are a young couple who move to a remote cottage. Ash is big user of social media, Martha doesn't really mind, she loves him and is looking forward to their new life together. When Ash is suddenly killed in a car accident a friend of Martha tells her to sign up to a service that allows her to keep in touch with the deceased. By using all his past online communications and social media profiles a new "Ash" can be created. Martha, unconvinced at the start unwillingly taps away and finds herself being drawn in by this dark and eerie service.

The Waldo Moment
Meet Waldo, a blue bear from a children's educational TV show who teaches them about the world through interviews with politicians and establishment figures. In reality however Waldo is an anarchic animated character on a satirical late-night topical comedy show who, once he has lured someone into the studio unleashes a series of humorous innuendo, sarcasm and childish vitriol. Waldo is voiced by a failed comedian Jamie Salter who's public success is in dark contrast with his less than happy personal life which becomes more apparent when this blue bear stands a chance of winning the By-Election.

White Bear
Victoria wakes in a house that she does not recognise and cannot remember anything about her life. There are photos of her with a man and another photo of a young girl on the mantelpiece--neither of whom she recognises. The TV is on and is playing a symbol that means nothing to her. Confused and agitated, she leaves the house only to find a deserted street but then she notices she's being watched, filmed. No one helps her or speaks to her until one girl reaches out and takes her on a journey that will shock and disturb ending with Victoria being publically shamed and put on trial for a crime too horrifying and her punishment never-ending.

For your chance to win just answer the following question...

Which channel in the UK did Black Mirror - Series 2 originally air?

To enter Email us with your answer, along with your name and address.

When the competition ends as indictated on this page, any and all entries received after this point will not count and emails blacklisted due to not checking this page first.

Winners will be chosen randomly and will be informed via email.
Posted by JD at 17:17 No comments: