And it's all about to change in Walford. 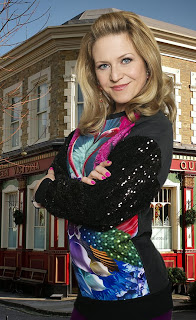 Linda Carter
Fluffy on the outside, but with a rod of steel through her centre, Linda Carter’s going to inject some energy into Walford!

Linda may look pink and fluffy, but under her heavily blow-dried quiff beats the heart of a little fighter. Bubbly and a bit ditzy at times, Linda was a stunner in her youth and although her husband Mick may joke that she’s got a few more miles on the clock these days, she’s certainly still in great nick for her age.
Linda has a critical tongue and will say hurtful things without realising it. But really Linda has a good heart and just wants people to be happy – though usually on her terms. For Linda it’s ‘my way or the high way’ and she has little time for people who don’t do as they’re told– like Shirley and Tina!
There’s nothing more important to Linda than her family. She prides herself on being a great wife and mother. However, her lioness tendencies sometimes lead her to go overboard on the love and affection front and she can come across as a bit of a ‘smother’. She’s a solid friend and is always happy to be the centre of attention, whether it’s with the girls or having some flirty banter with the lads. She’d never take things too far though – she loves her Mick more than anything!

With Linda’s larger than life personality and wardrobe to match, Walford’s not going to know what’s hit it!
Played by Kellie Bright 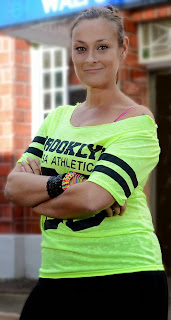 Tina Carter
Tina’s the kind of woman who can drink you under the table whilst making you cry with laughter with her back catalogue of dirty jokes. She is a loud, vivacious big kid who will do anything for a laugh.

There is never a dull moment when Tina is around. She lives life for the moment and doesn’t take anything too seriously! She is brash and naughty - her unpredictable nature and fondness for practical jokes is a dangerous combination, often landing her in hot water.

However, it’s not all practical jokes with Miss Carter, she has a deeper side. She is loyal, a great listener and wears her heart on her sleeve. She is forever a child in an adult’s body and has never really grown up. Truth is, she doesn’t much want to!

Tina is a lesbian and doesn’t care who knows it. She loves strong women and the drama of being in a relationship, often sabotaging a good thing when she sees it. She also gets a big kick out of flirting with men – often leading to more than just flirting! Tina has tried relationships with men in the past (There was Zsa Zsa’s father for starters…) but they have always ended in disaster because of her attraction to women.
She always intended to have a good relationship with Zsa Zsa. She was loving and caring but unfortunately never mature enough. Growing tired of mothering her own mother, Zsa Zsa moved out and the two now do little more than exchanging cards at Christmas. Tina pretends that she’s fine with this arrangement but deep down she yearns to have a better relationship with her daughter, but there’s no point crying over spilt milk, what’s done is done…

Tina has a close bond with her brother Mick, they’ve been through a lot together - cemented by their very early years in care. However, it was always her sister Shirley that Tina would turn to in crisis. She owes Shirley an awful lot and would do anything for her – even standing up to Phil Mitchell if need be! Tina knows Shirley inside out and enjoys nothing more than pressing Shirley’s buttons and then stepping back to watch the fireworks!

Email ThisBlogThis!Share to TwitterShare to FacebookShare to Pinterest
Labels: EastEnders