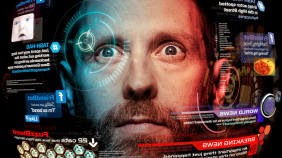 Award-winning comedian Dave Gorman returns to Dave with the second series of his critically acclaimed and innovative look at modern life and all its strange contradictions, habits and pitfalls.

Using his trademark blend of stand-up and documentary comedy, Dave flips open his laptop once again and fires up his PowerPoint to share more wry observations and frustrations. In the first series we saw Dave dissect idiocy on the internet, ill-thought-out technological solutions, unquestioned advertising logic, online ‘news’ and one-click agreements to pages of terms and conditions.

There isn’t a better or more spot-on analysis of modern life. And, let’s face it, the fact that a man called Dave has a show on a channel called Dave is the best.

S2 E1/7 I Call Mine Sally.
In this first episode, Dave gets involved in shredding some naughty magazines, helps a gerbil to fulfill its destiny, and is surprised by what develops when he finds an old-fashioned camera and hands the film in.
Posted by JD at 13:21