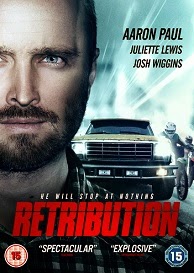 To celebrate the release of Retribution

on DVD and  on January 12th, we have got a great competition for you and 3 copies to give away on DVD

Synopsis:
Breaking Bad's Aaron Paul stars in this white-knuckle thriller about a father and his out of control teenage son set against the high-risk world of motocross.

Obsessed with heavy metal and seething with rebellious anger, 13-year-old Jacob (Josh Wiggins, Lost in the Sun) finds release in the exhilarating world of motocross but his increasingly reckless behaviour is threatening to spin out of control.

Its up to his hard-drinking father, Hollis (two-time Emmy Award-winner Aaron Paul) to get him back on track before he does something he cant take back.

Winners will be chosen randomly and will be informed via email.
Posted by JD at 13:38

Email ThisBlogThis!Share to TwitterShare to FacebookShare to Pinterest
Labels: Retribution