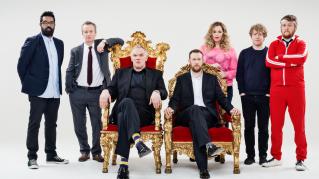 Whether trying to paint the best picture of a horse while riding a horse, filling an egg cup with tears or trying to high-five a 55-year-old, one thing is for sure: Comedians have never been so competitive. But it's much more than just a test of skill, wit and guile. They're risking more than their reputations, because in order to take part, they must put something personal into the prize pot...anything from valuable art to favourite items of clothing, even a wedding ring is on offer...

They do these tasks individually, under the careful gaze of Alex Horne. When they are brought together for the Taskmaster to judge their efforts, none of them know how they've done or, even more crucially, how the others did. Here they must try and convince the Taskmaster to reward their efforts. The results are sometimes up for debate but the Taskmaster's word is always final.
With their personal possessions up for grabs, they have everything to play for. Especially their dignity.

In the first episode Roisin Conaty, Tim Key, Romesh Ranganathan, Frank Skinner and Josh Widdicombe compete in a series of tricky tasks set by the Taskmaster, Greg Davies, and his assistant, Alex Horne. This week they have to try and paint the best picture of a horse while riding a horse. Also, expect melon-eating, bath-emptying and pop-up tents.