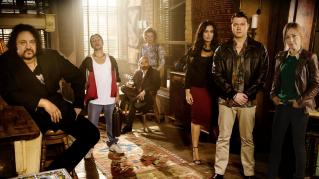 Undercover
UK Premiere - New Series
Tuesday 16th June, 9pm - DAVE
It's sort of like The Sopranos... if The Sopranos was a sitcom

This brand new six-part Dave original tells the story of Chris (BAFTA winner Chris Rigby), a neurotic, over analytical, metrosexual who is also an undercover policeman in a vicious Armenian crime family called the Sarkissians. His day to day tasks mainly revolve around not getting killed and blending in with excessively violent gangsters. Couldn't be simpler.

Fast tracked on the basis of his ethnicity (he had a Greek uncle, which is as near to Armenia as they could get), Chris has been placed undercover by the police in 'Operation Piccolo', to try and smoke out the upper echelons of the Sarkissian family and bring them to justice.

When our story begins, Chris is thrown in at the deep end with the arrival of a demanding new police handler DI Zoe Keller (Sarah Alexander) and is finally accepted into the Sarkissian family inner circle. DI Keller is his only point of contact with the outside world.

Each week there's a disaster in Chris's world that he attempts to survive, as the family 'Don', Ara Sarkassian (Sacha Alexander) and his family, competes against his younger brother Arno Sarkassian (Sèvan Stephan) and his crew for supremacy and the chance to move up the underworld ladder. As if that wasn't enough, Chris' predicaments are as much a consequence of his own social ineptitude and domestic awkwardness as they are to do with high-stakes Armenian criminal activity, and demands by a frustrated police force to get results - but there's plenty of that too. There's also Chris and Zoe's growing feelings for each other, plus her mysterious boyfriend who, despite never being there for her, is standing firmly in Chris' way. And then there's Lara Sarkassian (Yasmine Akram), Ara's niece - beautiful, sexy, and highly manipulative with an agenda all of her own...

S1 E1/6 Pilot:
Chris meets his new police handler, Zoe for the first time. She's ambitious and determined. Luckily for Zoe, Chris has been recently inducted into the inner circle of the family - meeting Ara Sarkissian and his right hand man Garabed, his mother Lucine and one of his many cousins, Hamo (guest star Michael Socha). Unfortunately for Chris, this now means he is in very real danger of losing his life. He is set the task of smoking out and 'dealing with' an accountant who has been stealing from the business. He succeeds, in all the wrong ways. But he's in - and to Zoe, that's all that matters.

Email ThisBlogThis!Share to TwitterShare to FacebookShare to Pinterest
Labels: Undercover