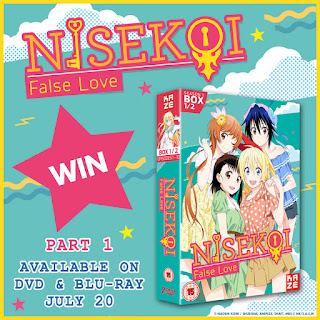 Raku's the son of a yakuza big shot. Chitose's the daughter of a rival mob boss. It's like Romeo and Juliet …except this Juliet would much rather kick her Romeo in the face. Stylish new rom-com Nisekoi: False Love sees the jokes flow thick and fast as we follow two classmates forced to pretend to be couple to keep the peace between their feuding gangster families. So funny, it's criminal.

Synopsis:
Raku Ichijo just wants to be a normal high schooler, but things have suddenly got super complicated for the yakuza family heir. You see, he fancies sweetly shy classmate Kosaki Onadera, but his gangster dad insists that he go out with brash new transfer student Chitoge Kirisaki, herself the daughter of a mob boss, to prevent an all-out turf war breaking out between the rival gangs.

Raku and Shitoge reluctantly agree to play along, but convincing a bunch of belligerent hoodlums that they're a lovey-dovey couple isn't going to be easy - especially as the hot-tempered Chitoge would far rather punch our hero than kiss him. And as if that isn't enough, ten years ago Raku promised a girl that they'd get married when they were reunited; a promise sealed when she gave him her locket. Only now he can't actually remember her name. Or what she looks like.

Winners will be chosen randomly and will be informed via email.
Posted by JD at 14:58

Email ThisBlogThis!Share to TwitterShare to FacebookShare to Pinterest
Labels: Nisekoi