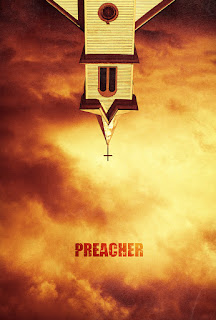 NEW YORK, NY – September 9, 2015 – AMC today announced it has ordered a series based on the twisted and popular ‘90s comic book franchise “Preacher,” created by Garth Ennis and Steve Dillon. The Sony Pictures Television and AMC Studios co-production was developed for television by Seth Rogen & Evan Goldberg (“This Is the End,” “Superbad,” “Neighbors”) and showrunner Sam Catlin (“Breaking Bad”). Rogen & Goldberg will produce the series through their Point Grey banner, along with Neal Moritz’s Original Film. AMC has ordered 10 one-hour episodes, with an expected premiere date in mid-2016.

“Preacher” is the story of Jesse Custer (Dominic Cooper, “Agent Carter”), a conflicted Preacher in a small Texas town who is inhabited by a mysterious entity that allows him to develop a highly unconventional power. Jesse, his ex-girlfriend, Tulip (Ruth Negga, “Agents of S.H.I.E.L.D.”), and an Irish vampire named Cassidy (Joseph Gilgun, “This Is England”) embark on a journey to, literally, find God.

“Garth Ennis’ ‘Preacher’ is, above all, about great characters – something we look for in all of our series,” said Joel Stillerman, president of original programming and development for AMC and SundanceTV. “The fact that it is also darkly funny, has some great supernatural elements, and takes us on an incredible adventure is just the icing on the cake. The incredible creative team behind this show – led by Seth Rogen, Evan Goldberg, Sam Catlin and Neal Moritz – made a pilot that completely blew us away, and we know the series will satisfy and surprise fans of the comics, and captivate fans of great TV everywhere.”

“We started reading the comic when it first came out in the ‘90s,” said Rogen & Goldberg. “In many ways Garth’s sense of drama and comedy and Steve Dillon’s visual aesthetic helped form our style, and the idea that we are actually bringing ‘Preacher’ to life is a dream come true. This is the craziest thing ever and we can’t wait to move forward and work our asses off to make it the best it can be."

Other previously announced series regulars include Ian Colletti as Eugene Root aka Arseface, W. Earl Brown as Hugo Root and Lucy Griffiths as Emily. Rogen & Goldberg directed the pilot, which was written by Catlin.

Email ThisBlogThis!Share to TwitterShare to FacebookShare to Pinterest
Labels: Preacher

Win The Luminaries on DVD