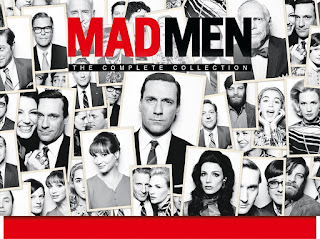 To celebrate the release of Mad Men - Complete Season 1-7 out on November 2nd on DVD & Blu-ray, we have a great competition for you and 1 copy to give away on Bluray.

Synopsis:
The concluding part of Mad Men’s seventh season sees Don Draper (Jon Hamm – Bridesmaids, TV’s Black Mirror) resuming his womanising ways as a bachelor and encountering a waitress named Diana at a diner, convinced they have met before, even though she insists otherwise. Ken Cosgrove (Aaron Staton – Ray Donovan, August Rush) has taken over his father-in-law's position at Dow Chemical, subsequently turning the tables on Roger (John Slattery – Ant-Man, The Adjustment Bureau) and Pete (Vincent Kartheiser – In Time, Alpha Dog), much to their surprise. Sally (Kiernan Shipka – The Unbreakable Kimmy Schmidt) is at college and slowly becoming disillusioned with her parents, but after receiving distressing news from two people very close to her, she decides to follow another path...

With 15 Primetime Emmy Awards, four Golden Globes, two Screen Actors Guild Awards and two BAFTAs to the series’ name, and having been cited as one of the top ten television shows of all time by the Writers Guild of America, there’s no doubt as to the legacy Mad Men leaves behind. What’s more, fans and completists will at last be able to get their hands on the Mad Men Complete Collection on Blu-ray and DVD as well as a very special Collector’s Edition Blu-ray box set limited to 2,000 copies and featuring a host of extra materials designed to fully immerse even the biggest fan into a world they’re already missing.

To enter answer this question: