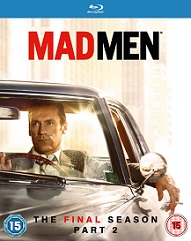 Mad Men the Final Season - Part 2 is out on DVD and Blu-ray on October 19th! and to celebrate we have a great competition for you and 3 copies on Bluray to win.

Synopsis:
All seven episodes from the second part of the seventh season of the Golden Globe-winning drama set in a prestigious advertising agency in 1970s New York, where sexism is a way of life and everyone smokes like a chimney.

In this instalment, big changes take place for the employees at Sterling Cooper and Partners after their office is shut down by formal rival agency McCann Erickson, which now owns the majority share of the business. Don (Jon Hamm) walks out of a meeting and leaves on a road trip, winding up at a retreat. Meanwhile, Betty (January Jones) receives some bad news and Joan (Christina Hendricks) considers her future in the advertising business. The episodes are: 'Severance', 'New Business', 'The Forecast', 'Time & Life', 'Lost Horizon', 'The Milk and Honey Route' and 'Person to Person'.

Winners will be chosen randomly and will be informed via email.
Posted by JD at 11:04