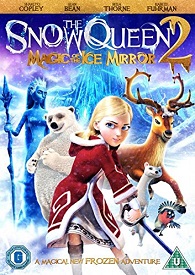 THE SNOW QUEEN: MAGIC OF THE ICE MIRROR, arrives digitally on October 26th and on DVD from November 2nd, 2015, courtesy of Signature Entertainment, and to celebrate we have a great competition for you and 3 DVDs to give away!

Synopsis:
Following on from THE SNOW QUEEN, the next chapter in the tale of Gerda, Orm and her friends sees a whole host of brand new, lovable characters join old favourites for another adventure in the wintry wonderland. THE SNOW QUEEN: MAGIC OF THE ICE MIRROR follows the troll Orm, as he exaggerates his exploits during THE SNOW QUEEN, creating a web of lies in which he single-handedly defeated the treacherous Queen. He claims he is destined to marry the princess and inherit great power and riches – but where will Orm’s stories lead him? In this lively and perilous adventure, Orm learns that friends, happiness, and true love cannot be won through deceit.

With an all-star voice cast that includes Sharlto Copley (District 9, Elysium) as Orm, Bella Thorne (Blended) as Gerda, Isabelle Fuhrman (The Hunger Games, Orphan) as Alfida and Sean Bean (The Lord Of The Rings, TV’s Game Of Thrones) as General Arrog, THE SNOW QUEEN: MAGIC OF THE ICE MIRROR is the perfect tale for all Frozen fans to curl up with this Christmas!


Win This:
The Snow Queen: Magic of The Ice Mirror [DVD]

Winners will be chosen randomly and will be informed via email.
Posted by JD at 15:17

Email ThisBlogThis!Share to TwitterShare to FacebookShare to Pinterest
Labels: The Snow Queen Magic of The Ice Mirror