However the transformation from page turner to gripping on screen drama may even be made without your knowledge, as some of our favourite characters have been taken from the pages of the nation’s best-selling novels – nowadays it is not just the big screen taking inspiration from the bookshelves.
To celebrate the release of The Leftovers: The Complete First Season on Blu-ray and DVD today we take a look at the top ten best journeys from book to box set of modern times.

1. The Leftovers
The Leftovers: The Complete First Season comes directly from the best-selling novel of the same name from Oscar nominated Tom Perrotta and Perrotta did not leave his involvement in the show there. He is co-creator of The Leftovers alongside Damon Lindelof (co-creator of Lost) and as a result the gripping show follows the novel almost religiously – but as season one comes to an end so does the storylines from the novel and we are in unchartered waters for the upcoming second season.

2. Game of Thrones
Going from book to box set has been famously tricky for the Game of Thrones production team and as several noble families fight it out for Westeros, with George R. R. Martin just a little behind his estimation on finishing the final novel in the series and his ruthless attitude towards characters means that nobody is safe, not even fan favourite Jon Snow!

3. Outlander
Following the series of novels by American writer Diana Gabaldon, Outlander follows a story full of time travel, history and heartache as Claire Randall is swept back in time to 1743 where she is forced to marry Jamie Fraser, a Scottish warrior.

With two very different lives Claire struggles to reconcile the two versions of her life.

4. Poldark
You could not avoid it the first time Winston Graham’s historical novels came to the small screen in 1975 and neither could you this year when Aidan Turner had that field scene as Captain Ross Poldark. The search for love amongst the Cornish countryside is captivating which is why box set number two is being filmed as we speak.

5. Pretty Little Liars
It was one of the biggest questions on television for some years and audiences were on the edge of their seats begging to find out exactly who ‘A’ was! But little did they know they could have got some insight from the young adult novels of the same name by Sara Shepard which followed the same four friends banding together against an anonymous foe while unravelling the mystery of the murder of their best friend in 2006.

6. Vampire Diaries
When Twilight hit cinemas vampires became the latest teen obsession and what better way to take vampires to television than to adapt L.J.Smith’s The Vampire Diaries from the early nineties.  Teenage girl torn between her love for two vampire brothers, Nina Dobrev and her co-stars transformed this story into a cult hit.

7. Gossip Girl
Straying somewhat from the original series of novels by Cecil von Ziegesar first published in 2002, Blake Lively, Chace Crawford, Leighton Meester and Ed Westwick became household names in this drama about privileged teens living on the Upper East Side of New York who struggle to hide their secrets from a ruthless anonymous blogger.

8. Sex in the City
Not quite a novel, but the tales of Sarah Jessica Parker’s character Carrie Bradshaw did originate from a collection of essays from 1997 by Candace Bushnell that were once published in The New York Observer. Throughout six seasons four New Yorkers gossip about men, men and more men whilst finding new ways to handle life as a woman in the nineties.

9. Orange is the new black
Based on Piper Kerman’s memoir about her experiences in a minimum-security federal prison from 2010 it tells the story of Piper Chapman, a woman in her thirties who is sentenced to fifteen months in prison after being convicted of a decade-old crime of transporting money to her drug-dealing girlfriend. A Netflix smash hit, this book to box set conversion has become a household name for Netflix original content.

10. Sherlock
Sir Arthur Conan Doyle’s Sherlock Holmes has been remade more times than we can count but in this modern update starring Benedict Cumberbatch the BBC may have found the best adaptation. Transferring this famous sleuth and his doctor partner to the 21st century was certainly a risk by Steven Moffat but it has gone down a storm and we are eagerly awaiting a fourth series.

The Leftovers: The Complete First Season is out now on Blu-ray and DVD! 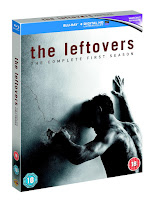