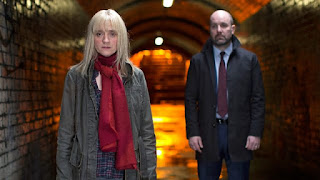 The discovery of a new victim carries a haunting message for Claire - her old shoulder number left on the body. It can't be dismissed as coincidence - someone wants Claire's attention, and she can't run any longer. When she returns to Manchester to work alongside John, he is invigorated by Claire's presence, desperate to use the investigation to reignite old flames - but not everyone is so happy. Norrie, already feeling Claire slipping away from him, tries to persuade her to return home, but Claire insists that she can't, and as they argue more secrets from Claire's past emerge.

As Claire is drawn into the task of identifying the bodies, her desire for justice supersedes her fear of violence. She strives to persuade the Fenton family to help identify their daughter Mimi, one of the possible victims. But when John wants her to accompany him to see the bodies, Claire refuses: she's not ready. Eventually, as tensions rise between them, the personal and professional collide for John and Claire. New clues about a women's clinic are unveiled, and John is left derailed by Claire's confession that she may once have been pregnant with his baby. John is fraught, wanting to know more, but Claire stonewalls him, instead finally agreeing to see the latest victim's body and confront the violence.

At the morgue, Claire has a revelation: there are differences between the new victim and the bodies from the 90s. She deduces that there are two killers - one from then, and one now. John, however, dismisses Claire's theory as overemotional and unfounded, and Claire finds herself ignored once again. Determined to fight for the women she let down, Claire plunges more recklessly into the case, only realising too late that her own life is directly threatened too.

Email ThisBlogThis!Share to TwitterShare to FacebookShare to Pinterest
Labels: From Darkness