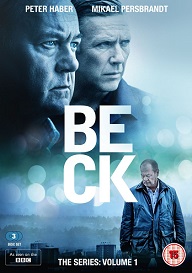 Beck The Series: Volume 1 is released 16th of November on DVD and to celebrate we have a great competition for you and 2 copies to win on DVD

Martin Beck is one of Nordic Noir’s first and definitive Scandinavian detectives epitomising the good-cop bad-cop routine alongside his petulant partner, Gunvald Larsson. Based on the characters of the hugely popular Martin Beck detective series of novels by Swedish husband-and-wife writers Maj Sjöwall and Per Wahlöö, Beck sees the much-loved detective brought to life on the small screen. Beck is arguably the originator of what has become known as Nordic Noir.

This collection of five feature-length films (Four from the latest season and one from the previous, the latter receiving a theatrical release in Sweden) sees detective Martin Beck investigating the shocking death of a young woman found strangled in a hotel room, a gangster kingpin executed by a sniper in front of his family, a terrorist attack and a suspicious hospital death which sourly turns out to be premeditated murder. It’s an intricate web of characters and lies and the killer is never who you expect it to be.

Starring Peter Haber (The Girl With The Dragon Tattoo) as Beck and Mikael Persbrandt (The Hobbit: The Desolation Of Smaug, Salvation and The Hypnotist) as Larsson, the drama’s combination of complex woven details of police detection and beautifully realised characters combined with twisting, masterful storylines has ensured that the award-winning series won fans and acclaim from around the world.

Which actor plays Beck in Beck The Series?

Winners will be chosen randomly and will be informed via email.
Posted by JD at 16:04

Email ThisBlogThis!Share to TwitterShare to FacebookShare to Pinterest
Labels: Beck