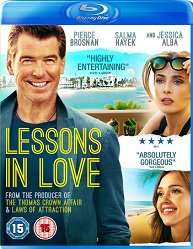 Synopsis:
By day, Richard Haig (Pierce Brosnan, is a well-respected professor at Trinity College in Cambridge, where he teaches 18th century romantic poetry. By night, Richard indulges his own romantic fantasies with a steady stream of beautiful undergraduates, including his most recent beau Kate (Jessica Alba). But when Kate tells him that she is pregnant the confirmed bachelor has mixed feelings as he s just met, and fallen for, her gorgeously sassy sister Olivia (Salma Hayek).

Richard and Kate move to Malibu to raise their son Jake and Olivia returns to New York. Richard is devoted to his son and the few two years on the Pacific are idyllic. But professionally he has stalled and Kate has been distant, so Richard is a little hurt but not surprised when Kate confesses she has fallen in love with a younger man, Brian (Ben McKenzie).

Richard wants to stay in the U.S. for Jake, but also to be with Olivia who has moved in, along with his father Gordon (Malcolm McDowell), who convinces Richard not to give up and do whatever it takes to hold his family together.

Win This:
Lessons In Love [Blu-Ray]

Winners will be chosen randomly and will be informed via email.
Posted by JD at 16:11

Email ThisBlogThis!Share to TwitterShare to FacebookShare to Pinterest
Labels: Lessons In Love