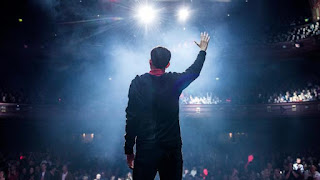 Dynamo and UKTV are joining forces to broadcast live the world's biggest magic show, Dynamo - Live at The 02, in a special one-off television event.

After selling out over 100 dates for his debut live arena tour, Dynamo will become the first magician in history to headline The O2 to an assembled audience of around 10,000 with his critically acclaimed show, Seeing Is Believing. And in another world first, the whole show will be broadcast LIVE on UKTV's new premium entertainment channel, W on Wednesday 30 March at 7.30pm.
Shrouded in secrecy, the show is the culmination of over 10 years work and has attracted audiences of over 400,000 people across 100 dates since its inception last October.


I've been overwhelmed with all the amazing support from fans I've had as I've toured the length and breadth of the country. Now I want to make sure that those who couldn't get tickets can still enjoy the show and hope that those who've been to see me will want to relive it again on W.

Richard Watsham, director of commissioning added,
I'm delighted to be continuing our relationship with Dynamo by broadcasting this stage show like no other. After four brilliant series of his BAFTA-nominated show Magician Impossible, we've missed him! Now viewers will get to share, live, in what he's been up to, seeing for themselves the extraordinary achievement behind Dynamo Live.


Dynamo's show is the hottest ticket in town and I'm delighted we'll be bringing our viewers on W this unique broadcast event. It's a fantastic show combining expert story-telling with knock-out magic.

The audience will include many of Dynamo's celebrity friends who are grabbing the opportunity to see one of his last live performances in the UK tour. Dynamo's genre-bending mix of mind-blowing illusions, incredible sleight of hand and innovative street magic has wowed audiences worldwide since he first broke through with his global smash hit UKTV show Dynamo: Magician Impossible.