THE KRING OF TV 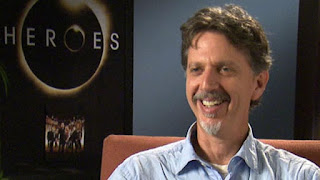 Tim Kring is well known as the creator of the iconic Heroes and the brain trust behind the return to that universe that is Heroes Reborn, released on Blu-ray and DVD from May 9th, 2016 courtesy of Universal Pictures (UK). What’s less well known, perhaps, is that Kring cut his teeth on some other very familiar series before he conceived the likes of the Petrellis and good old HRG:

Knight Rider (1986)
As a young upstart, Kring was one of the writers behind the much loved, deeply 80s Knight Rider. Kring may only have penned one episode of the series that brought us The Hoff and his talking car, KITT, but what an episode it was. ‘Voo Doo Knight’ saw the perfectly coiffed Michael Knight go up against a ring of art thieves who made use of a Voodoo Princess to will their hapless stooges into stealing artifacts without any knowledge of what they had done. And lo, Kring did dabble with the mystical at an early age.

Bay Cove (1987)
Many a young would-be horror fan spent the 1980s trawling the Radio Times for the minefield that was ITV’s late night schedules. The horror gems that lay buried between American football and regional filler ranged from Hammer Horror to borderline video nasties and the occasional obscure gem like Bay Cove. Starring Tim Matheson (famous for The West Wing and Animal House), Bay Cove followed a newlywed couple that a local coven tries to entice after their move into the eponymous Maine town. Mild horror it may have been, but that didn’t stop this horrorphile taping Kring’s early work on more than one occasion.

Teen Wolf Too (1987)
The first Teen Wolf saw Michael J Fox, at the height of his powers, playing a lycanthropic high school basketball star to enormous success so a sequel shouldn’t have surprised anyone. Granted, Kring’s screenplay adhered to the old adage of not fixing things that weren’t broken so Jason Bateman (playing Fox’s cousin) got to retread a familiar groove but this is another of Kring’s early works that imbues a sense of fondness and familiarity. And let’s face it; this means Kring basically made Modern Family possible (if you squint a bit) so all the more power to the man!

Chicago Hope (1996-1997)
Kring was responsible for four episodes in total of the once hugely popular medical drama that made household names out of Mandy Patinkin and Hector Elizondo whilst also providing platforms for TV stalwarts like Adam Arkin, Mark Harmon and Peter Berg. The show was helmed by David E Kelley of Ally McBeal fame and ran for five years between 1995 and 2000, with Kring’s episodes (two teleplays and two stories) airing in the show’s second year.

Crossing Jordan (2001 – 2007)
Crossing Jordan was the first show that Kring got to strap a ‘created by’ credit to, easing his feet under network tables with a procedural crime drama before unleashing the creativity that would ultimately deliver Heroes. With a cast that included Miguel Ferrer (AKA George Clooney’s cousin or the face of a thousand 80s and 90s bad guys), the series ostensibly followed a tenacious and feisty Boston medical examiner but it won fans for its supporting cast of family and friends who rooted the show in a familiarity other procedurals often overlook. Heroes – and indeed Heroes Reborn – followed a similar mould in focusing on ordinary people to whom extraordinary things happen.

Heroes (2006 – 2010)
The original superhero TV series in an era where audiences (either at home or in cinemas) were not yet at home with the boys and girls in spandex to the degree they are now. Sure, we’d had Bryan Singer’s first two X-Men movies by then and movie tech was beginning to catch up with comic book imagination but a TV series that capably told an everyman superhero story without the huge quantities cheese and terrible attempts at gaudy costumes was something new. Fortunately there’s a handy new box set to allow you to refresh your memory before…

Heroes Reborn (2015)
Kring returns to his beloved and most richly realized universe for this event series which picks up the story several years after Heroes, combining the fates of some familiar faces with those of a host of new ordinary Joes with extraordinary powers. However, instead of relying on the past, Heroes Reborn instead uses his returning cast as support for the new characters, creating a typically compelling mystery and sense of event along the way – one that only gets stronger as the series progresses.

HEROES REBORN arrives on Blu-ray and DVD from 9th May, 2016, courtesy of Universal Pictures (UK)

You can pre-order from the following Amazon links:
Heroes Reborn [DVD] [2016]