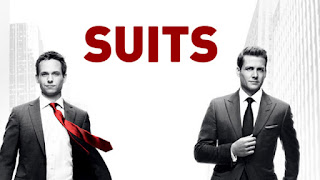 Mike Ross (Patrick J. Adams) and Harvey Specter (Gabriel Macht) are back as everybody's favourite legal duo in the riveting fifth season of Suits, available on Blu-ray and DVD from 6th June, 2016, courtesy of Universal Pictures (UK). This season sees more twists and turns than ever before, making it a must watch for all fans. To celebrate its release we look back at some of the show's best ever moments... (Beware: Spoilers!)

1. Mike gets hired (Pilot – S1, Ep1)
One of the best scenes to date comes all the way back from the pilot. Following a drug deal gone bad Mike Ross accidently stumbles into a job interview with none other than New York's finest legal closer, Harvey Specter. Fed up with the typical Harvard Law School grad, Harvey decides to take a risk and hire Mike after witnessing his natural talent, determination, and impeccable memory. This scene marks the birth of one of television's most beloved duos and sets the standard for all episodes to come.

2. Mike and Harvey get stoned (High Noon – S2, Ep10)
Following a string of emotionally tense episodes, Suits was in dire need of some comic relief. Mike, still suffering from the death of his grandma, is surprised when Harvey comes knocking at his door. Expecting a stern lecture, Mike instead finds himself with a new smoking buddy. Hilarity ensues as the two get high, eat pretzels, and battle the torment of 'cotton mouth'. This provides a rare look at Harvey when he is not working and firmly establishes the strength of the pair's comradeship.

3. Harvey vs. Louis (Blood in the Water – S2, Ep12)
After coming to the conclusion that Louis (Rick Hoffman) is helping a competitor firm poach clients Harvey storms into his office, trashes his desk, and unleashes a tirade of verbal punches exclaiming exactly how he feels. Louis denies the accusations but is met with a degrading rebuff, marking what seemed to be the end of their partnership. The scene provides us with insight into just how intimidating and scary Harvey can be when he gets going, confirming for all the doubters that he is not someone you want to be on the wrong side of.

4. Rachel and Mike hook up (War – S2, Ep16)
The seemingly inevitable hook up between Rachel (Meghan Markle) and Mike finally happens in the closing episode of season two. Rachel realises that Mike lied to her about her Harvard application and demands a reason why. Following an emotional speech about how he fears losing her, Mike confesses his deepest secret – he never actually went to law school. In typical Hollywood fashion their argument escalates into a full blown office romp that rivals the hottest and steamiest scenes on TV.

5. Louis has a heart attack (Heartburn – S3, Ep14)
Heartburn is an impossible episode to forget given it's a completely unexpected run of events. At first we see a new and improved Louis, oozing calmness and swagger – credited to his successful love life. Everything's coming up smelling of roses for Louis... until he collapses mid trial due to a heart attack. After awaking in hospital, Louis decides life is not to be wasted and takes his relationship to the next level by asking Sheila (Rachael Harris) to marry him.

6. Mike accepts a new job (No Way Out – S3, Ep16)
The lively season three finale keeps its characters and viewers in a constant state of paranoia as Harvey is targeted by a ruthless US attorney on bribery accusations. Mike is arrested and interrogated over the situation but fails to succumb to the pressure and spill the beans on Harvey, despite the looming threat of a background check. After Louis swoops in to save the day, Mike decides that he no longer wants to live as a fraud and accepts a new job – cue manly reserved goodbye between him and Harvey. Thankfully it isn't the last time we see the two together!

7. Louis resigns (Gone – S4, Ep9)
It was a heartbreaking moment for all when Louis packed up his things and parted ways with the firm he adored so much. His decision to resign was not something planned but instead an impulsive attempt to hold onto his remaining dignity after realising he was going to be fired. No one enjoyed hearing the earnest letter Louis penned to mark his departure, but I think it's safe to say we all knew this wouldn't be the last we saw of Mr. Litt.

8. Louis becomes a named partner (Enough is Enough – S4, Ep11)
The transition from Pearson Specter to Pearson Specter Litt was one of mixed feelings. On one hand it was great seeing Louis return and move forward in the company given his unquestionable worth and determination. On the other hand, the way he blackmails Jessica (Gina Torres) into the decision shows the petty side of the character that not everyone is fond of. Regardless of how you look at it, this moment is central in the development of certain relationships and events to come.

9. Donna chooses Louis (Denial – S5, Ep1)
Season five tackles the shocking decision previously made by Donna to leave Harvey and work for Louis right off the bat. The audience gets to see just how much she means to Harvey as he struggles to come to terms with her departure. Whether you see it as betrayal or a necessary career move, it is warming to see Harvey break down over the loss of his trusted PA.

10. Mike and Harvey own up to their actions (25th Hour – S5, Ep16)
Everything seems to be falling apart for the gang as the enthralling fifth season comes to an end. However, the highlight of the final episode comes right in the heart and centre of the chaos. Mike shares a touching word with Harvey where they both accept blame for what is happening and realise they would most likely do it all again. This moment reduces the show back to its core – Mike and Harvey's friendship. It is the perfect way to end a must see season!