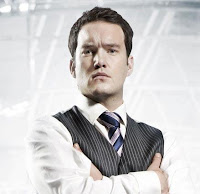 GEEKEDFEST is coming to Newport Centre on 6th & 7th August and are excited to announce a local lad to the weekend with none other than the actor, singer, all-round great guy…Gareth David-Lloyd!

Gareth is well known in the TV circuit; he has an extensive list of appearances from TV to Theatre and even voice acting for the gaming industry. Gareth’s first appearance was in the TV show “Absolute Power” as Pope Idol. From then he starred in shows such as “Casualty”, “Mine all Mine” and “Beethoven”. In 2008 Gareth became the well-known “Ianto Jones” character in Doctor Who to then continue the role into Torchwood. After 38 episodes (he will be back though!) Gareth worked on “Waterloo Road” and “Holby City” to name a few and more recently in 2014 voiced the character “Solas” in Dragon Age: Inquisition. Phew!

Apart from being on-screen Gareth has appeared in many theatre shows and fronts the metal progressive bank “Blue Gillespie”.

This is Gareth’s first comic-con in his home-town and will be at GeekedFest all weekend available for autographs and photo-booth sessions. He is also supporting GeekedFests’ chosen charities Popsy and Ty Hafan. You can buy tickets to GEEKEDFEST online now at www.geekedfest.com. VIP tickets are only available until midnight 31st July.

Email ThisBlogThis!Share to TwitterShare to FacebookShare to Pinterest
Labels: GEEKEDFEST