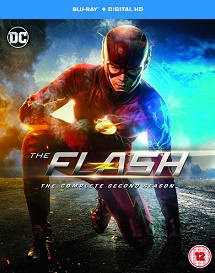 The Flash - Season 2 is released on DVD and Bluray™ on September 12th by Warner Home Video, and to celebrate we have a great competition for you and 3 copies to give away on Bluray™

Last year, the S.T.A.R. Labs Particle Accelerator exploded, creating a dark matter storm that struck forensic scientist Barry Allen - bestowing him with super-speed and making him the fastest man alive. But Barry wasn't the only person who was given extraordinary abilities that night.

The dark matter also created meta-humans - many of whom have wreaked havoc on the city. With the help of the S.T.A.R Labs team, Caitlin Snow, Cisco Ramon and Dr. Harrison Wells, Barry protects the people of Central City from these powerful new threats as The Flash. Following the defeat of Allen's arch-nemesis Eobard Thawne (aka Reverse Flash), Team Flash must quickly turn their attention to the singularity swirling high above Central City, consuming everything in its path.

Armed with the heart of a hero and the ability to move at super speeds, Barry charged into the eye of the singularity, but can he actually save his city from impending doom?


To be in with a chance of winning this brilliant prize, simply answer the question below.

Terms and conditions
1. Closing date 19-09-16
2. No alternative prize is available
3. When the competition ends as indicated on this page, any and all entries received after this point will not count and emails blacklisted due to not checking this page first.
4. Winners will be chosen randomly and will be informed via email.