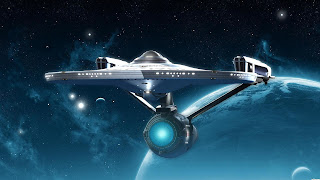 For fifty years Star Trek has both attracted and created fans of science fiction. Any true Star Trek fan will tell you that the series has inspired numerous films and television shows with its high tech fantasy and boundary breaking plots.

In honour of the 50th anniversary of the series, and the release of the 50th Anniversary TV and Movie Collection on Blu-ray on 5th September, we have compiled a list of the top 10 Star Trek-inspired films and television programmes spanning decades of entertainment history.

The beginning of possibly the most successful franchise ever, Star Trek: The Original Series was rated the greatest cult show in history by TV Guide in 2004. It maintained its number one spot when the magazine revised the ranking in 2007. It is hard to believe that when Roddenberry first presented the original series to CBS, CBS turned it down and went with Lost in Space instead. The cult following that now spans over 5 decades and across the world was a surprise to all.

An interesting fact about The Original Series is that Roddenberry originally wanted Spock's skin to be a dark red or at least to have a red tint. Unfortunately (or fortunately?) in the world of black and white television the idea was immediately abandoned!

Speaking of cult followings, Doctor Who attracted a similar adoring audience from its birth onto small screens. Even now, its influence is undeniable; "Bow ties are cool”, said Matt Smith in his first appearance as The Doctor and bow tie sales shot up by 94% within a month!

Fans have followed the thrilling adventures of a Gallifreyan Time Lord only known as The Doctor and his ever-changing companions for over 50 years. The programme was rebooted in 2005 to much critical acclaim, and new series subsequently saw Christopher Eccleston, David Tennant, Matt Smith and Peter Capaldi take the helm as The Doctor.

A spin-off from a popular TV series, Galaxy Quest received its cinematic debut in 1999 and featured many of the original cast. The success of the film spawned 18 annual conventions around the globe which fans flock to every year.

Director Dean Parisot and star Tim Allen revealed in interviews that the original tone of the film was much darker, with more scenes of violence. After test screenings, the film was recut to emphasize the comedy and obtain a PG rating. This intergalactic adventure, which interestingly was also the feature film debut of Justin Long, has now officially reached cult status!

Five hundred years into the future, a renegade crew aboard a small spacecraft try to survive as they travel the unknown parts of the galaxy smuggling cargo and occasionally people. The crew’s evasion of warring factions and agents of the notorious ‘Alliance’ had viewers hooked and just as the ‘Alliance’ did, fans were tracking every move of this series. The show became an unprecedented cult hit and culminated in the 2005 film, Serenity which was also created by legendary writer and director, Joss Whedon.

In this sci-fi adventure, the crew of the ship Serenity tries to evade a vicious assassin sent to recapture one of the crew members, a young girl called River.

The feature film was a spin off from cancelled television series Firefly, and embraced the western genre alongside its science fiction roots. Interestingly, the DVDs of Firefly and Serenity were flown up to the International Space Station by astronaut Steven Swanson on board the shuttle Atlantis during its June 2007 STS-117 mission.

This trilogy details the infamous adventures of Marty McFly, a 17-year-old high school student who accidentally travels 30 years into the past in the original film. Featuring a now legendary DeLorean, and the eccentric scientist Doc Brown, the films have gone down in sci-fi history. You wouldn’t believe that the script for the first film was rejected over 40 times by every major studio before finally being made in 1985.

This thrilling and action-packed TV series follows the adventures of a secret military team, SG-1, formed to explore the universes made accessible by recently discovered “stargates”.
The franchise began with the film Stargate (2007) and produced two further spin-off series including Stargate Atlantis and Stargate Universe.

Producers of the Stargate SG-1 kept up with the opinions of their fans. The episode “Ascension” was directly inspired by ideas left in message board comments, showing the commitment and dedication given by the producers as well as the overwhelming fan base.

This update of the late-1970s series takes an unquestionably darker tone as what's left of humankind struggles for survival against the robot Cylons who have killed millions. Also, in a strange link with No. 5, when character Laura Roslin goes to the doctor’s and finds out she has cancer, the ship from Joss Whedon’s series Firefly can be seen landing through the main windows.

An unlikely group of individuals including a talking tree and a genetically modified raccoon are forced to work together to stop a fanatical warrior from taking control of the universe in this modern interpretation of Marvel’s Guardians of the Galaxy comic book characters.
Although the film was popular, and crossed the $700 million worldwide box office mark, it was the sound track that proved a truly exceptional hit... Guardians of the Galaxy: Awesome Mix Vol. 1 reached the top of the Billboard 200 chart, becoming the first soundtrack album in history consisting entirely of previously released songs to top the chart.

Andromeda shares a deeper tie to Star Trek than just being set in outer space; it was based on the notes Gene Roddenberry left behind.  The series that documents the adventures of Captain Dylan Hunt and his crew members as they pilot the Andromeda Ascendant thousands of years in the future, was heavily compared to Star Trek. The show stirred up attention for also using Star Trek’s main writer Robert Hewitt Wolfe, which led to parallels being drawn between the two show’s key characters - Captain Dylan Hunt and Captain Kirk.

Although Andromeda didn’t garner the same commercial success as Star Trek, it ran for 5 series, was re-syndicated on multiple networks and received several awards and accolades - proving that there is still a healthy appetite for sci-fi series!