Fortitude - The Story So Far 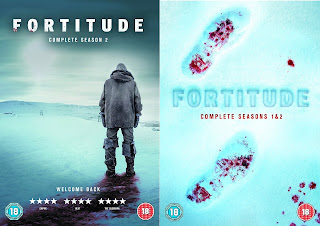 With the release of Fortitude Season 2 out May 1st on DVD and Blu-ray we decided to take a look at the story so far....

Season two begins several weeks after the disturbing events of season one as the strange goings-on continue in the town of Fortitude after a body is discovered. The wasp contamination has been eliminated, but the effects are still fresh and life isn’t the same for the once close knit community.

Located in the Arctic Circle, Fortitude is a remote, but perfect little town – or at least that’s what it seemed. The series opened with sickly Henry (Michael Gambon) as he comes across a polar bear attacking a man. He aims his rifle at the bear but accidently kills the man instead. When friendly and sympathetic Sheriff Dan (Richard Dormer) shows up, he lets Henry go.

Two children make a discovery unlike any other – a mammoth tooth. However later, one of the children, Liam (Darwin Brokenbro), brutally murders the local professor Charlie (Christopher Eccleston). Anyone who touches the tooth becomes infected by wasps which cause strange and violent behaviour. With two murders occurring in what used to be a peaceful town, everyone is on edge.

The lives of the people in Fortitude are more interconnected than originally believed as the murder mystery continues. Liam’s parents are scrutinised, bringing to light his father Frank’s (Nicholas Pinnock) affair with hotel manager Elena (Verónica Echegui). To make matters more complicated, it is revealed that Eric (Bjorn Hlynur Harlödsson), Governor Odegard’s (Sofie Gråbøl) husband, has been having an affair with Trish (Chipo Chung), Professor Charlie’s wife, and that Sherriff Dan, who played a blind eye to Henry, has feelings for Elena.

DCI investigator Morton (Stanley Tucci) comes to town with the goal of solving the murder which was quickly blamed on a polar bear. He however suspects something more sinister. It is revealed Dan is Henry’s son and he attempted to kill the man attacked by the polar bear to protect Elena. Henry shoots DCI Morton, making sure no-one finds out the truth and then turns the gun on himself. Carrie (Elizabeth Dormer-Phillips), who was with Liam when the tooth was discovered, is surprisingly unaffected by the wasps.

In an intense conclusion to the first season, we find a group of people on a quest to find the cause of these behaviours. Natalie (Sienna Guillory) is amongst them. She and team member Vincent (Luke Treadaway) discover that the wasps are the cause and go to destroy them, but not without one last causality – Elena is infected. As she attempts to kill young Carrie, Sheriff Dan has no choice but to shoot her.

As season two begins, Dan is missing and is now presumed dead despite Eric’s desperate attempts to find him. Plus, Governor Odegard is desperately fighting to save her job and a town in disrepute.    Out in the stunning wilderness, nature is growing ever more dangerous and the town of Fortitude is faced with unpredictable new threats. The sky has turned red with a Blood Aurora, and a mysterious new stranger arrives at the isolated town with an unsettling agenda. When another murder brings terror to the already fragile community, we soon realise that in Fortitude nothing, and no-one, is ever what we expect.

Don’t miss your chance to own the second season of the compelling psychological thriller as FORTITUDE: THE COMPLETE SEASON 2 is out May 1st

Email ThisBlogThis!Share to TwitterShare to FacebookShare to Pinterest
Labels: Fortitude