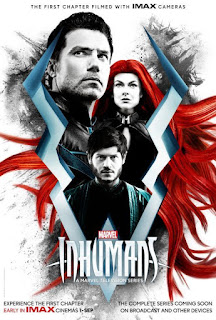 Marvel's Inhumans, or simply Inhumans, is an upcoming American television series developed for ABC, based on the Marvel Comics race of the same name. It is set in the Marvel Cinematic Universe (MCU), sharing continuity with the films and other television series of the franchise. The series is produced by ABC Studios and Marvel Television, with IMAX Corporation as a financing partner and Scott Buck serving as showrunner.

The series is centered around Black Bolt, with Anson Mount in the role, and other members of the Inhuman Royal Family. A film from Marvel Studios based on the Inhumans began development in 2011, before being announced in October 2014 for a November 2018 release as part of their Phase Three slate of films. The species was first introduced to the MCU in the second season of Marvel's Agents of S.H.I.E.L.D., and the film was subsequently removed from Marvel Studios' release schedule in April 2016. Inhumans was announced that November, to be partly filmed on IMAX digital cameras and to be the first live-action television series to debut on IMAX screens. Buck joined the series the next month. Mount was cast in February 2017, with Iwan Rheon, Serinda Swan, Eme Ikwuakor, Isabelle Cornish, Ken Leung, Ellen Woglom, Sonya Balmores, and Mike Moh also starring in the series. Filming took place from March to June 2017, at the former Naval Air Station Barbers Point airfield in Kalaeloa, Hawaii.

Inhumans is set to debut on IMAX screens on September 1, 2017, and run for two weeks, before premiering on ABC on September 29, and airing eight episodes.
Posted by JD at 15:52

Email ThisBlogThis!Share to TwitterShare to FacebookShare to Pinterest
Labels: Inhumans