Most Kick-ass Women on TV 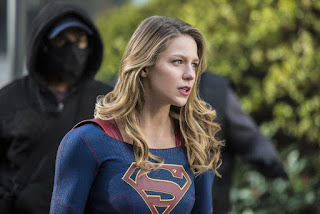 Rising up against the backdrop of a male-dominated world, comes a force yet to be rivalled and reckoned with: kick-ass women. Bursting with bravery, passion and selflessness, these mighty women strive to tackle evil in any shape or form and will stand strong against anyone who tries to get in their way. After risking everything to save National City in an epic battle, Supergirl is back and better than ever with some help from a certain famous cousin of hers… To commemorate Supergirl season 2 coming to Blu-ray™ and DVD on August 21, we are celebrating with a selection of the most kick-ass women on our screens.

Supergirl
Having been blessed with extraordinary supernatural powers and being the younger cousin of the great and heroic Superman, Supergirl had some big boots to fill in tackling threats and protecting the Earth. After 10 years of concealing her remarkable powers, Supergirl finally let her powers shine through and proved just how capable she is in protecting the Earth. Independent, bold and paired with some unbelievable powers, she is truly a heroic leader and a kick-ass woman.

House of Cards: Claire Underwood
Acting as a successful lobbyist, Claire occupies a position of great power, yet she successfully remains humble, as a figure at the forefront of an environmental non-profit organisation. Being the wife of Frank Underwood, the crafty protagonist, Claire is under immense pressure to succumb to the manipulative power and scheming that surrounds her. Yet Claire is strong and unrelenting, never to be a woman to shy away from standing up for what she believes in, she is a kick-ass woman, fighting for what is right.

Mad Men: Peggy Olson
Being the stereotypical product of a 1950’s male-dominated world, secretary Peggy Olson is everything that you would expect her to be: out of her depth and the object of male desire. But looks can be deceiving and it soon becomes clear that Peggy is a natural born leader that can kick-ass with her instinctive intelligence and revolutionary ideas. Being one of the early powerful women to take to our TV screens, Peggy is an inspirational icon that our modern-day kick-ass women can look up to and mirror in their actions.

Homeland: Carrie Mathison
Differing from most superhero’s, Carrie Mathison not only faces a battle in the field, but also within her own self and mind. Facing toxic battle lines, Mathison, an established CIA officer, finds herself in combat against Al-Queda and an undercover U.S Marine in a battle that will push her to the very limits. Dealing with her ongoing bipolar disorder, Carrie constantly struggles with the balance between emotion and strategy making her tasks far from easy. Yet we must remember that Carrie Mathison is a kick-ass woman, meaning that she rarely falters in her actions, remaining resolute and ready to take on the world.

Dexter: Debra Morgan
When the day job involves fighting off murderous psychos you need to learn to be fearless and one step ahead of the game. Here enters resourceful cop Debra armed with her resilience and colourful foul-mouth personality. A kick-ass female, Debra laughs in the face of vulnerability and takes on danger before it even arises, scaring off anyone who dares to cross her.

Scandal: Olivia Pope
When in need of a kick-ass political specialist, Olivia Pope is the best candidate there is. Not only does Olivia make history by being the only dramatic protagonist played by a kick-ass black woman on American TV since 1974, she makes historical waves everyday by defending the president of the United States. An unflappable crisis manager, Olivia is classy in style and practice, leading a team of ‘gladiators’ with ease, whilst they support and stand with her in a series of complex missions.

Own Supergirl: The Complete Second Season On Blu-ray™ & DVD August 21!