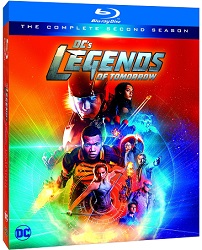 Review by Jon Donnis
With Season 3 airing in October this year, now is the perfect chance to catch up, and I have done just that with Season 2 of Legends of Tomorrow, and I was lucky enough to catch up with the excellent Blu-ray release, which came out on the 14th of August.

Out of the gates the Legends have to deal with a new set of villains without Rip Hunter, as he has disappeared. And this sets us up for the season with new cast members coming in. And new villains too.

The second season has a different feel than season one, mainly due to us now having the core cast being established, so we get to delve deeper into the characters, their motivations, and their history and their futures in some cases. While the central theme of this season is the Spear of Destiny, we get some cool crossovers with other DC shows, including the excellent episode "Invasion", where we get to see Supergirl, Green Arrow, and The Flash all appear. But even if you do not watch their respective shows, their appearances are all part of the Legends of Tomorrow arc, so still all fits in well.

Season two in my opinion is much improved over season one, and I for one am looking forward to season three.

The Blu-ray release gets a whole load of great extras including a Gag-Reel, Comic Con panel, delete scenes and more.

So I can highly recommend season two of DC's Legends of Tomorrow.
And you can but it from Amazon using the links below which open in a new window.

Synopsis:
DC’s Legends of Tomorrow amps up the firepower for Season Two of the Super Hero team-up series by enlisting both a league and a legion of new characters to join the legendary crew of the Waverider.

Charged with protecting the timeline from temporal aberrations – changes to history that spawn potentially catastrophic consequences – the Legends reassemble with the addition of historian Nate Heywood (aka Citizen Steel) and Justice Society of America member Amaya Jiwe (aka Vixen).  And yet, for every force of good, there is an opposing force of darkness.  In Season Two, the Legends of Tomorrow face off against the first ever team of DC Super-Villains: the Legion of Doom, including Malcolm Merlyn, Damien Darhk, Captain Cold and the Reverse Flash.

After saving the world from Vandal Savage and the corrupt Time Masters, the Legends of Tomorrow are now charged with protecting time (past, present and future) itself, taking them across history and up against the power of the Spear of Destiny – a threat unlike any humanity has ever known.