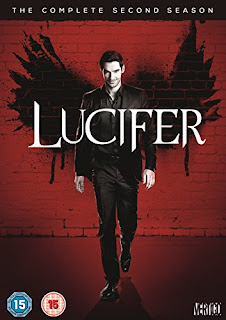 Review by Jon Donnis
After an excellent first season, I was very happy to see the show had been renewed for a 2nd season, and now we have a 3rd season airing in the Autumn in the US.

But back to season 2 which is released on DVD and Bluray 21st August, and specifically the best named character in the history of television in "Lucifer Morningstar".

Lucifer and Detective Chloe Decker are solving crimes once again, but this season we get to delve deeper into their evolving relationship, which makes for some great moments and the whole "will they, wont they" dynamic grows. Add to that new character Charlotte Richards played by the gorgeous Tricia Helfer, who just so happens to be Lucifers mother who has escaped from hell, and you have a whole new load of directions the show can go.

Whether it is the sibling rivalry with Amenadiel, or awkwardness with Chloe, the season grows and grows through all 18 episodes.

I think the reason this show has hit so well with audiences is that it really does have a bit of everything, it has the whole love story element which will surely be the theme until the show finishes for good, you have the sibling rivalry, you have big action, the supernatural, and you have humour, something many shows in this genre really struggle to get right, but Lucifer seems to have gotten it just right.

So if you enjoyed season 1, and even if you have already seen season 2 on TV, I would still recommend this release, because it is a show you will want to go back and watch again.

You can buy the show from Amazon using the link below which opens in a new window.
Lucifer Season 2 [DVD] [2017]

Synopsis
LUCIFER is the story of the original fallen angel. Bored and unhappy as the Lord of Hell, Lucifer Morningstar abandoned his throne and retired to Los Angeles, where he has teamed up with LAPD detective Chloe Decker to take down criminals.

Charming, charismatic and devilishly handsome, Lucifer has a way of manipulating people into confessing their deepest, darkest secrets, which helps Chloe deliver justice. But Lucifer quickly discovered that Chloe makes him vulnerable. When he's around her, the devil can bleed like anyone else. It's a truly scary realization that doesn't sit well with his best friend, Mazikeen aka Maze, a fierce demon in the form of a beautiful young woman. Maze wants nothing more than to leave Los Angeles and get back to her life in Hell, but Lucifer is having one helluva good time with the mortals and she is not about to leave him behind.

At the end of Season One, Chloe watched Lucifer die, only to come back to life, causing more confusion over who and what he really is. Meanwhile, her estranged husband, Dan, also an LAPD detective, comes clean about his involvement in a corrupt case - jeopardizing not only his job, but also their relationship.

In Season Two, Lucifer and his brother angel, Amenadiel, who've been sparring over Lucifer's resistance to returning to the underworld, will now be brought back together for one common goal - to find their mother, who's escaped Hell. After all, Lucifer doesn't take after his dad, so the parent he does resemble is sure to be quite terrifying.

With mom on the loose, Dr. Linda - who's become not only a therapist, but also a confidante to Lucifer, Amenadiel and Maze - will surely have a lot of advice to dole out. And, by the time she's done with them, she may need a therapist of her own.

L.A. is hotter than ever in this one-hour drama from Jerry Bruckheimer Television, based on the characters created by Neil Gaiman, Sam Kieth and Mike Dringenberg for DC Entertainment's Vertigo imprint.

Email ThisBlogThis!Share to TwitterShare to FacebookShare to Pinterest
Labels: Lucifer