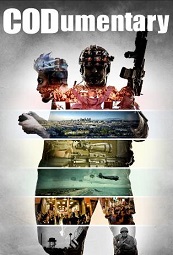 CODumentary is out on DVD & Blu-ray on September 19th and to celebrate we have a great competition for you and 3 copies of the Blu-ray to give away.

Synopsis:
An independent look at how the Call Of Duty franchise took on all-comers and became one of the largest global entertainment franchises of all time, CODUMENTARY arrives on Blu-ray, DVD and digital platforms from September 19th, courtesy of Devolver Digital Films and Fizz Pictures.

Spanning more than 16 years and including input and insight from developers, fans, industry experts and professional esports players from around the globe, CODUMENTARY sees writer, director and producer Jonathan Beales examine the state of play as rival developers raced to create a generation-defining gaming experience at the start of the noughties. With Infinity Ward’s original Call Of Duty taking the spoils, the stars were then aligned for COD: Modern Warfare to take things to the next level...

Shot on location across the UK, USA, Rio De Janeiro, Paris, and even Utah Beach, Normandy, the real-life location of the D-Day Landings, CODUMENTARY gets under the series’ skin to begin to understand how Call Of Duty in all of its iterations has truly and constantly evolved to maintain a seemingly unassailable position at the top.

You can pre-order the brand new COD game now at Amazon using the link below
Call of Duty: WWII Pro (PS4)


Terms and conditions
1. Closing date 26-09-17
2. No alternative prize is available
3. When the competition ends as indicated on this page, any and all entries received after this point will not count and emails blacklisted due to not checking this page first.
4. Winners will be chosen randomly and will be informed via email.
Posted by JD at 12:00

Email ThisBlogThis!Share to TwitterShare to FacebookShare to Pinterest
Labels: CODumentary