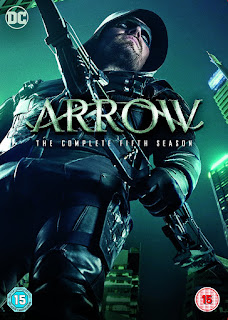 Review by Jon Donnis
Let me put all my cards on the table before I go forward with my review. I watched season 1/2 of Arrow, and then tuned out half way through season 3, I felt like the show was losing something, and was going down the route of too much "relationships" and "love stories" which I simply am not interested in when watching what is a superhero action show. But after missing out on season 4 completely, I decided to give the show another chance for season 5, one reason was I had a gap in my viewing schedule, and another reason is that I figured that the fact the show kept getting renewed might mean that not only was I missing something but that I really should give it another try, and I am glad I did.

I watched a few catchup trailers, read a few recaps, and managed to catch myself up on what I had missed.

Oliver Queen is now the Mayor, and in season 5 he is fighting against the bad guys as the Green Arrow but also as the Mayor. His team has split up, and it is pretty much just him and Felicity, but as the season progresses we get new heroes stepping up, and wanted to help defend the city. Of course this brings it's own set of problems for Oliver to deal with, and much of the season is very much him trying to come to grips with things and finding the best way to move forward.

Season 5 made me a fan again of Arrow, and I cant say any more than that. Now I need to go back and watch Season 4 and truly catch up on what I have missed.

You can buy season 5 of Arrow from Amazon using the link below which opens in a new window.
Arrow - Season 5 [DVD] [2017]

Synopsis
After a violent shipwreck, billionaire playboy Oliver Queen (series star STEPHEN AMELL) was missing and presumed dead for five years before being discovered alive on a remote island in the North China Sea. Oliver returned home to Star City, bent on righting the wrongs of his family and fighting injustice.

As the Green Arrow, he protects his city with the help of former soldier John Diggle (series star DAVID RAMSEY), computer science expert Felicity Smoak (series star EMILY BETT RICKARDS), his vigilante-trained sister Thea Queen (series star WILLA HOLLAND), former police captain Quentin Lance (series star PAUL BLACKTHORNE) and brilliant inventor Curtis Holt (new series regular ECHO KELLUM). Newly appointed Mayor Oliver Queen finds himself challenged as he fights on two fronts for the future of Star City. With Diggle back in the military and Thea adamant about hanging up her hood as Speedy, Team Arrow is down to just Oliver and Felicity -- but they're no longer the only vigilantes in town.

The Green Arrow's public defeat of Damien Darhk (guest star NEAL McDONOUGH) at the end of Season Four has inspired a new crop of masked heroes to step up and defend the city, though their painful inexperience makes them obstacles, rather than allies, in the field. The arrival of a deadly new adversary will force Oliver to confront questions about his own legacy, both as mayor and as the Green Arrow.

Email ThisBlogThis!Share to TwitterShare to FacebookShare to Pinterest
Labels: Arrow