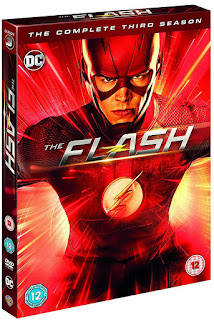 Review by Jon Donnis
Probably my favourite out of all of the DC made TV series, The Flash is back, and season 3 is probably the most important in the shows history.

The show goes down the whole time travelling/multi universe route, and the consequences of such actions.

We get to meet Dr. Alchemy, the seasons first major villain, but he is just the starter, and we soon get introduced to Savitar. And the question of "who is Savitar" is a major plot point, and ok, the vast majority of fans probably figured it out pretty quickly, but even that didn't hurt the eventual reveal towards the end of the season.

We get to see a few sides of Barry Allen this season, and it really shows likeable Grant Gustin is as Barry, when you consider the uproar of fans when he wasn't picked to play The Flash in the new DC movie releases. Grant Gustin's version of The Flash as soon become the best version yet.

Much like Arrow, Supergirl and Legends of Tomorrow, The Flash also gets its own specific crossover episode with stars of the other shows coming in. DC really have hit on a great formula here to promote other shows within it's universe. And it is satisfying as a viewer if you follow all the different shows to see characters you would never expect to cross paths, do so in such an entertaining way.

Although the main point of season 3 is for Barry to find a way to stop Savitar murdering Iris, there is an inevitability in this crime, and the season finale and the final big battle really is something to savour.

The Flash is so well written, and very clever in how it portrays the various characters, their emotions, and their own storylines.

The Flash has become unmissable when it airs live, and owning it on DVD is just another way to enjoy a great show, and sometimes you need to go back and rewatch an episode to see if you can spot the clues that really do give you insights into what is happening.

Joe adopted Barry fifteen years ago after Barry’s mother was murdered and Barry’s father, Henry Allen (recurring guest star JOHN WESLEY SHIPP), received a life sentence for the crime -- though Barry always maintained that a mysterious "Man in Yellow" was responsible. Then the S.T.A.R. Labs Particle Accelerator exploded, creating a dark matter lightning storm that affected Barry, bestowing him with superspeed and making him the fastest man alive. But Barry wasn't the only person who was given extraordinary abilities that night. The dark matter also created meta-humans, many of whom have wreaked havoc with their powers on the city. With the help of his scientist friends at S.T.A.R Labs, Caitlin Snow (series star DANIELLE PANABAKER), Cisco Ramon (series star CARLOS VALDES), and Dr. Harrison Wells (series star TOM CAVANAGH), Barry began a journey as The Flash to protect the people of Central City from these powerful new threats. With this team, Barry was finally able to defeat the Man in Yellow, aka The Reverse Flash, but in their epic battle, a Singularity was ripped in space and time that threatened to destroy them all.

After successfully closing the Singularity from destroying Central City, Barry thinks he's seen the worst... but the arrival of Jay Garrick (recurring guest star TEDDY SEARS) reveals that the Singularity actually opened portals to an alternate Earth, known as Earth-2, which is being terrorized by a formidable evil speedster named Zoom. As Zoom sends an army of Earth-2 meta-humans to Earth-1 to defeat Barry, he receives unexpected assistance from the Earth-2 doppelganger of his former mentor, Harrison Wells. Meanwhile, Cisco discovers that he, too, was affected by the dark matter of the Particle Accelerator and must come to terms with his newfound powers. As Barry struggles to juggle life as a hero, he realizes just how hard it is to find happiness when the lives of everyone you love are at stake. He finds some solace in the companionship of his father, Henry Allen, who was freed from a wrongful life sentence... but when Zoom kills Henry before Barry's eyes, Barry's newfound stability is shattered.