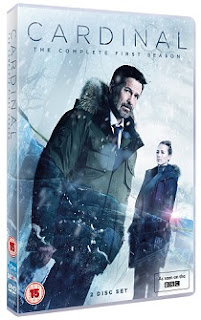 Cardinal The Complete First Season is out on DVD on October 2nd and to celebrate we have a great competition for you and 3 copies of the DVD to give away.

Synopsis:
A brand new darker than dark Canadian TV drama Cardinal is set to become the newest contender to the crown of mind-blowing foreign imports. This thrilling, chilling, Nordic-noiresque crime series, has been internationally acclaimed and now arrives on UK DVD courtesy of eOne.

The most watched new Canadian series for 2017, this gripping, disturbing thriller from the team behind Orphan Black and Saving Grace, is adapted from award-winning book Forty Words Of Sorrow, the first in the series of John Cardinal novels by Giles Blunt.

Following its run on BBC 4 this six-part drama is set to change our perceptions of Canada and arrives on DVD as Cardinal The Complete First Season on 2 October 2017.

Set against the stunning icy backdrop of Northern Ontario, the body of a missing 13-year-old is discovered and troubled detective John Cardinal (Billy Campbell – The Killing) is brought back into the homicide team, after a hunch he wouldn’t let go of and one he almost lost his job over, is proven horribly correct.

Now, as he searches for the murderer in an all-consuming race to stay one step ahead of a brutal serial killer, he must also face his own personal demons, as his family life threatens to unravel, while keeping a watchful eye on his new partner, detective Lise Delorme (Karine Vanesse – Revenge), who he believes may have a secret agenda.

Can Cardinal catch the savage killer in this twisted game of cat and mouse or will it be his downfall in this riveting, stomach churning series that set is to become a classic Boxset favourite?

Special features: Inside the Location, Adapting Cardinal to the screen, Who is John Cardinal?

Terms and conditions
1. Closing date 16-10-17
2. No alternative prize is available
3. When the competition ends as indicated on this page, any and all entries received after this point will not count and emails blacklisted due to not checking this page first.
4. Winners will be chosen randomly and will be informed via email.
Posted by JD at 16:04

Email ThisBlogThis!Share to TwitterShare to FacebookShare to Pinterest
Labels: Cardinal