Chris Young - Walk a Mile: Tales of a Wandering Loon 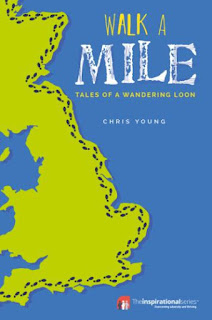 Walk a Mile: Tales of a Wandering Loon is the story of how one man’s normal, nurturing childhood turned into one of neglect, alcoholism and sexual abuse following his mother’s death. His story explores how this, combined with a little faulty brain wiring, lead Chris to a severe and enduring mental illness. It is also the story of how he’s tackling mental health stigma, one step at a time.

As a kind, chatty, and good-humoured man with a zest for life and a passion for helping people, Chris Young adored his job as a social worker. But things fell apart when, in 2008, he was diagnosed with borderline personality disorder, the symptoms of which include vivid, horribly imaginative thoughts of violent self-harm, long or short periods of dissociation in which the world around him doesn’t feel real, difficulties maintaining healthy relationships and inappropriate or uncontrollable anger.

His illness brought about the end of his job, the failure of his marriage and the loss of his home.

Desperate for help, he undertook group psychotherapy and slowly learned to understand, accept, and better manage his condition.

Along the way, he realised that he wanted to give something back. His work in social care had shown that even some mental health professionals  were prejudiced against borderline personality disorder. Chris Young wanted to change people’s perceptions of mental health and prove that people, no matter their background, race, age, or political affiliation, could be fabulous, hospitable, interested and interesting and eager to talk about mental ill health.

He came up with Walk a Mile in my Shoes – an awareness campaign in which he would walk around the edge of the UK, representing the edge of society, where many people with mental health problems feel they are. In the style of the Jain monk Satish Kumar, who walked from India to Pakistan in the 60’s to share his views on nuclear arms, Chris Young would make his Walk a Mile trek with no money, relying solely on the kindness of other people for food, water, shelter and compassion. He would go only with a backpack full of supplies and a head full of ‘what if', bringing people together to discuss mental health and the issues surrounding it.

And so in 2011, 34 years to the day after his mum’s death, Chris embarked on his journey. He was joined along the way by members of the public, as well as celebrities such as Sir Chris Hoy, and the adventures shared on his blog soon captured public and media interest throughout the country.

Walk A Mile is the story of Chris Young's struggle to reach an understanding of his own mental health,  looking back at the traumatic events leading up to his diagnosis and treatment. He also shares tales of his eye-opening, heart-warming travels around the UK, and the many wonderful people he met along the way who shared their stories.

He's since joined with See Me Scotland, a Scottish programme to tackle mental health stigma and discrimination, to bring people together at #LetsWalkAMile events throughout Scotland to talk about mental health, literally walking a mile in each other’s shoes. He has also founded the Walk a Mile in My Shoes charity, with the aim of bringing the events to England, Wales and Northern Ireland.

Chris knows he's not going to 'get better', but he is getting better at managing his condition, and he's happy. He wants to continue the many conversations he's started about how we can change the stigma around mental health.

Chris Young was born and grew up in Corby, Northamptonshire. After completing a degree in psychology in London, he moved to Edinburgh, where he completed a Masters in Social Work at Edinburgh University. He lived in before returning to Edinburgh, and now lives in Warwickshire with his wife.