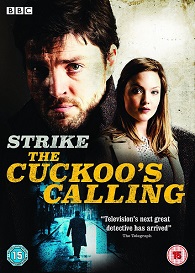 Strike: The Cuckoos Calling is out on DVD on 27th November and to celebrate we have a great competition for you and a copy of the DVD to give away courtesy of Warner Bros Home Entertainment

Tom Burke, who most recently starred in BBC’s epic War & Peace as ‘Fedor Dolokhov’ and in The Musketeers as ‘Athos,’ is Strike, a war veteran turned private detective operating out of a tiny office in London’s Denmark Street.  Though he’s wounded both physically and psychologically, Strike’s unique insight and his background as an SIB Investigator prove crucial when he begins to seek the truth surrounding the mysterious death of supermodel Lula Landry.

Holliday Grainger, who most recently starred in BBC’s Lady Chatterley’s Lover as Lady Constance Chatterley, plays Robin, Strike's assistant. Though she begins as a temporary secretary, managing Strike’s chaotic life, she soon becomes involved with his caseload and begins to see her true potential.

You can buy the DVD from Amazon UK using the link below (opens in a new window)
Strike: The Cuckoos Calling [DVD] [2017]

To be in with a chance of winning, all you need to do is answer this question.

Terms and conditions
1. Closing date 04-12-17
2. No alternative prize is available
3. When the competition ends as indicated on this page, any and all entries received after this point will not count and emails blacklisted due to not checking this page first.
4. Winners will be chosen randomly and will be informed via email.
Posted by JD at 11:31

Email ThisBlogThis!Share to TwitterShare to FacebookShare to Pinterest
Labels: Strike: The Cuckoos Calling