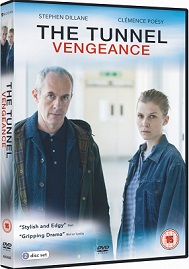 The Tunnel: Vengeance - Series 3 is out on DVD and Blu-ray on January 22nd and to celebrate we have a great competition for you and 3 copies on DVD to give away courtesy of Acorn Media UK

This emotionally-charged, critically acclaimed thriller reunites Stephen Dillane in his award-winning role as Karl Roebuck with Clémence Poésy as Elise Wassermann, in a provocative and thrilling drama.

The Tunnel: Vengeance is set in a post-Brexit Europe where the English and French teams come together once more in an emotionally charged finale.

When a stolen fishing boat is found adrift and on fire in the English channel, Karl and Elise believe the missing cargo consisted of trafficked migrant children. As a disenfranchised and toxic duo enact a terrifying endgame, Elise is shocked to the core by a miscarriage of justice from her past.

Together and apart, they are forced to grapple with decisions they have made and must make decisions that cut to the deadly heart of the matter: what is the value of a single life?

You can buy this from Amazon UK using the following link that opens in a new window.
The Tunnel: Vengeance - Series 3 [DVD]

Terms and conditions
1. Closing date 29-01-18
2. No alternative prize is available
3. When the competition ends as indicated on this page, any and all entries received after this point will not count and emails blacklisted due to not checking this page first.
4. Winners will be chosen randomly and will be informed via email.

Email ThisBlogThis!Share to TwitterShare to FacebookShare to Pinterest
Labels: The Tunnel