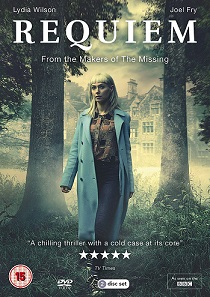 BBC Drama Requiem is out on DVD on March 19th and to celebrate we have a great competition for you and 3 copies on DVD to give away.

What if you discovered that your parent had lied to you? That almost everything they'd said about their own history, and yours, was untrue? In 1994, a toddler disappeared from a small Welsh village, never to be seen again. 23 years later, in London, the mother of rising cello star Matilda Gray commits suicide, without apparent reason.

Among her possessions, Matilda discovers tantalising evidence, linking her mother to the Welsh girl's disappearance all those years ago, sending her grief-stricken to Wales. Determined to find out who she really is, Matilda unravels her own identity and exposes long buried secrets that a remote community are trying desperately to forget. One secret is more bizarre, terrifying and dangerous than anything she could have imagined one that has been waiting many years for Matilda to return.

You can buy this from Amazon UK using the following link that opens in a new window.

Terms and conditions
1. Closing date 26-03-18
2. No alternative prize is available
3. When the competition ends as indicated on this page, any and all entries received after this point will not count and emails blacklisted due to not checking this page first.
4. Winners will be chosen randomly and will be informed via email.

Email ThisBlogThis!Share to TwitterShare to FacebookShare to Pinterest
Labels: Requiem