Channel 4’s new show TRUE HORROR begins on 19 April, for 3 episodes - with the final of 4 eps going out at Halloween. 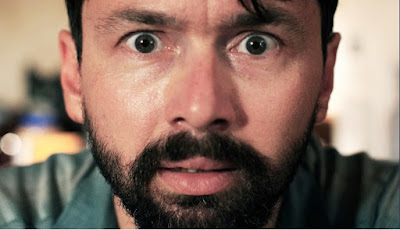 From the BAFTA nominated producers of The Enfield Haunting, this dramatised documentary series will take you into the heart of four terrifying true horror stories.

Ep. 1 Hellfire Farm – 19th April
This dramatised documentary tells a terrifying true horror story: An artist, his new wife and their young children find a rural idyll in a Farmhouse in the Welsh hills. But it becomes a nightmarish crucible of demonic activity which drives the family apart

Liz and her partner, artist Bill Rich move into a dream home - a farm house nestling in the hills of the Brecon Beacons in Wales. Two children arrive in quick succession. Liz collects a menagerie of rescued farm animals. Bill at last has a proper studio space.

But almost immediately, things start to go sour in their perfect home: Things move around the house inexplicably; Bill’s artwork stops selling; animals begin to die. Their precarious finances are hit by insanely high electricity bills – which no-one can explain.

Bill retreats into his painting, which gets darker and darker, fuelled by the weird visions the farm conjours. Liz, meanwhile, is absolutely petrified and turns to the local priest for help. As the marriage crumbles, the haunting reaches a terrifying climax.

Ep. 2 Ghost In The Wall – 26th April
This dramatised documentary tells a terrifying true horror story: A young mother fears that her dead father-in-law has returned, with a horrific plan: to steal her children.

Jason and Sam are teenage sweethearts. Jason’s dad, Jimmy doesn’t approve of the relationship. Jimmy is desperate for grandchildren. Before Sam can make her peace with Jimmy, he dies suddenly of a heart-attack. Meanwhile, Jason’s dreams are plagued by visions of demonic figures.

Sam and Jason are joyous when they finally have children – just sorry that Jimmy isn’t around to see them. Or is he? For Sam, Jimmy’s desire for grandkids takes on an apparently sinister turn. When one of her children is seriously ill in hospital, Sam  becomes convinced that Jimmy has come to take her children. As Jimmy intrudes on their lives in more and more sinister ways, Sam realises she will have to fight to protect her children from the ghost of their grandfather.

Ep. 3 Terror In The Woods – 3rd May
This dramatised documentary tells a terrifying true horror story: Two prank-obsessed teenagers escape suburban boredom into their fertile imaginations.  When they dare one another to spend the night in some haunted woods, they experience terror beyond their wildest imaginings.

Stephen is always trying to persuade Todd to go camping with him in the woods outside their small home town of Horsham. The forest has a reputation for being haunted, and are some say they are home to mass graves. Todd thinks Stephen might be setting him up for a prank, especially when they end up pitching their tents near the haunted church in the middle of the woods but he goes along for the ride.

Late that night, their torches and phones stop working and they are surrounded by all kinds of terrifying noises and apparitions. As the night goes on and the activity becomes more and more disturbing, both of them are left shaken and traumatised - breathing a sigh of relief when dawn comes and they can return to the safety of their suburban homes.

But a week later, Stephen - still pale and not eating - has the uncanny feeling that something has followed him home. He calls in paranormal investigators, which leads to the boys’ most horrifying experience of all.

Ep. 4 The Witches’ Prison – October, Halloween special
This dramatised documentary tells a terrifying true horror story: A single mother’s battle to protect herself and her defenceless baby boy from a haunted house with a tormented past.

Successful saleswoman Vanessa Mitchell buys a house which is rumoured to be a former Witches’ prison in St. Osyth, Essex, the village she grew up in. ‘The Cage’ is a cute Tudor cottage but as soon as Vanessa and flatmate Nicole move in, they witness increasingly strange events. Flying objects, mysterious pools of blood and an invisible entity that rattles doors and pushes people downstairs are enough to spook anyone.

As friends and housemates are gradually scared away, Vanessa is left virtually alone. Before she finds that, to her astonishment, she is five and a half months pregnant.

Increasingly isolated and oppressed as a working, single-mother in a house besieged by paranormal activity, Vanessa vows to let nothing hurt her new-born child. But can either of them survive the increasingly viscious attacks they endure?