Competition: Win The Parkinsons: A Long Way to Nowhere on DVD 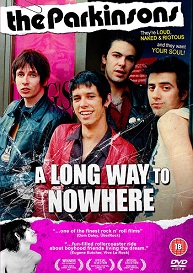 To celebrate the release of The Parkinsons: A Long Way to Nowhere on DVD out on April 30th we have a great competition for you and 3 copies to give away.

Synopsis
London. The dawn of the new Millennium. The Britpop party is over and the UK music scene is suffering from a severe hangover. The promise that Things Can Only Get Better now seems like a distant dream. Then, as if from nowhere, The Parkinsons burst onto the scene and give the music business a shot in the arm and a kick up the arse.

Singer Afonso, guitarist Victor, and bassist Pedro,  arrive in London from Coimbra, Portugal – land of Fado, Catholicism and boredom, in search of adventure, and team up with fiery Scottish drummer Chris Low. Soon the loud and riotous band The Parkinsons are on the rampage.

Described as a cross between the Sex Pistols and Iggy Pop, their rise to fame and notoriety was rapid, and their reputation for chaos preceded them,  with a penchant for getting naked and abusing anyone who got in the way of their rock ‘n’ roll mentality.

From London they were unleashed on the rest of the UK, earning legions of fans and rave reviews along the way, while wreaking havoc and upsetting anyone and everyone in their path.

Now a rip-roaring new film The Parkinsons: A Long Way to Nowhere, tells their extraordinary story. Seven painstaking years in the making, this labour of love and directorial debut  from Caroline Richards, editor of  London The Modern Babylon, Oil City Confidential and The Ecstasy of Wilko Johnson, arrives on DVD, with more than 90 minutes of bonus material, on 30 April 2018 from Bluebell Films.

Compiled from hundreds of hours of incredible and intimate fly-on-the-wall footage along with interviews with the band and other key players, this is a  unique, hilarious, moving and deeply human story of maximum rock’n’roll, the likes of which we are unlikely to see again.

Terms and conditions
1. Closing date 07-05-18
2. No alternative prize is available
3. When the competition ends as indicated on this page, any and all entries received after this point will not count and emails blacklisted due to not checking this page first.
4. Winners will be chosen randomly and will be informed via email.

Email ThisBlogThis!Share to TwitterShare to FacebookShare to Pinterest
Labels: The Parkinsons