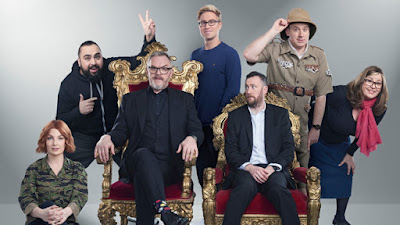 It's super series six of Taskmaster and Greg Davies returns to command five new comics/victims to creatively complete apparently pointless missions in ways that will either amuse or bemuse His Royal Taskness.

Widdicombe! Ryan! Beckett! Fielding! Mortimer! Five names not in this series, but five names who can, do and will forever call themselves Taskmaster Champions. Who will join that pretty little pantheon? Alice Levine, Asim Chaudhry, Liza Tarbuck, Russell Howard or Tim Vine? No one yet knows, but after ten punishing episodes one of them will lift aloft Greg's almighty golden head in a moment of obscene glory.

Sitting next to the Taskmaster in a smaller, less ornate chair is Greg's perennial data analyst, pen pusher and all-round sidekick, Little Alex Horne. He'll be on hand to help his leader in any way he can, whether that's in an advisory capacity on-camera or with private things carried out off-camera.

So, how will our funny five fare when asked to perform a stunt with a wheelbarrow, discover the length of a piece of string, or find something in common with somebody called Carol? More importantly, how will their efforts be received by Greg - with polite praise, or seething censure? There is rarely a middle ground; he is the Taskmaster after all; not the Taskfencesitter.

So, Taskmaster Greg Davies is back with his assistant Alex Horne to challenge five brave comics to take on his tricky tasks. First: wheelbarrow stunts, lemon towers and a big wardrobe in a field.