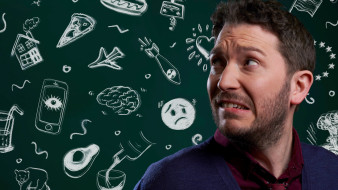 Flustered Brits waste 17 and a half hours a week - or six and a half years of their lives - fretting about often trivial worries that mostly never happen, a new study reveals. Not sleeping enough, personal appearance and being in to collect a parcel are the most common daily worries.

The biggest worriers are 36-year-olds, who typically spend three and a half hours a day stressing, and one in 10 admit they spend seven hours or more fretting each day. But by the age of 44 and over they have learned to calm down, fretting for just one hour and 42 minutes a day. The survey also highlighted how needless our worries tend to be with Brits typically admitting that half of their concerns are totally out of their hands.

The national worry audit of 2,000 British adults was commissioned by TV channel Dave to launch the new series Jon Richardson: Ultimate Worrier which airs Wednesdays. The show sees obsessive worrier and compulsive organiser Jon Richardson attempt to analyse, assess and log every single one of his many worries.

Not only do people worry about sleeping enough but they actually lose sleep from fretting over often trivial troubles. We typically lose four hours and 40 minutes each week - the equivalent of a lost night's sleep every 12 days.

Worries change with age as, alongside getting enough sleep 18-24 year-olds fret most over their phone battery dying (45%) and how they look (44%), while over 55s are more anxious about being home to receive parcels (27%), losing their wallet and the weather (each 17%).

Brits typically start worrying about their phone battery dying when it reaches 31% of capacity but one of 20 is already vexed when there is still 85% charge remaining. As for appearance, Brits most often worry about their weight (51%), followed by discoloured teeth (35%) and looking tired (32%).

Over half (51%) of those aged 44 and under will share their worries with a stranger but three quarters (76%) of people aged 45 and over say they will only confide in people they know.
Hairdressers are revealed as the nation's unlikely therapists with almost one in five (21%) Brits having confided in their stylist, followed by bar staff (11%).

"This survey highlights that we, as a nation, are spending far too much of our time on trivial worries. Hopefully by watching Ultimate Worrier, you will be able to put aside your worries for a while and just enjoy the brilliant wit of Jon and guests as he lists, discusses and categorises his worries with some brilliantly funny guests. This show brilliantly combines our propensity to worry about the trivial with our uniquely British coping mechanism - wit. "