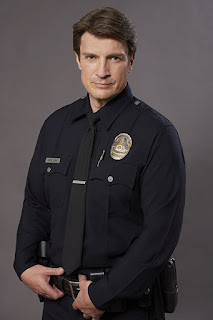 Starting over isn't easy, especially for small-town guy John Nolan who, after a life-altering incident, is pursuing his dream of being an LAPD officer. As the force's oldest rookie, he's met with skepticism from some higher-ups who see him as just a walking midlife crisis. If he can't keep up with the young cops and the criminals, he'll be risking lives including his own. But if he can use his life experience, determination and sense of humor to give him an edge, he may just become a success in this new chapter of his life.

Nathan Fillion as John Nolan: The oldest rookie at the Los Angeles Police Department.
Afton Williamson as Talia Bishop: A newly promoted training officer whose first assignment is Nolan.
Eric Winter as Tim Bradford: An overbearing training officer.
Melissa O'Neil as Lucy: A rookie cop, who struggles with a domineering training officer and might be developing a budding romance with Nolan.
Richard T. Jones as Wade Grey: A sergeant, who becomes a nemesis to Nolan.
Titus Makin as Jackson West: An eager rookie officer and the son of a high-level commander in the LAPD.
Alyssa Diaz as Angela: An LAPD Training Officer on the cusp of making detective-trainee that all gets threatened when she gets assigned to West.
Mercedes Mason as Zoe Andersen: Nolan's confident and irreverent commanding officer.

Email ThisBlogThis!Share to TwitterShare to FacebookShare to Pinterest
Labels: The Rookie