Barbara Rafferty’s back in River City - but not as you know her! 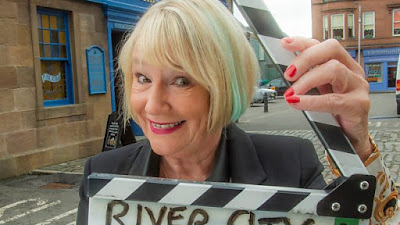 After leaving River City over a decade ago, acclaimed actress Barbara Rafferty returns to BBC Scotland’s much-loved drama to play a brand new character, Bernie O’Hara, who will stir up trouble and turn heads in Shieldinch.

Barbara new role as Bernie sees her play the eldest daughter of Molly (Una McLean), sister of Scarlett (Sally Howitt) and Theresa (Maureen Carr) and auntie to Bob (Stephen Purdon). A true of O’Hara, Bernie’s quick to stick her oar in. She puts her uncanny perceptiveness down to a sixth sense but for some Bernie’s a shameless chancer.

Barbara, who first appeared in River City as Shirley Henderson between 2006-2008, is thrilled to be back as a new character: “I’m really excited about returning and looking forward to wandering the streets of Shieldinch again after all these years. I see Bernie as a cross between Wyatt Earp and Calamity Jane with a Glaswegian twist, of course. Going back to River City is a joy. It’s like a family down there with an amazing production team and I feel instantly at home already.”

Kieran Hannigan, Executive Producer for BBC Studios, says: “Barbara is one of Scotland’s finest actors and ten years feels like a long enough hiatus for her to be away from Shieldinch. Bernie is such a different character from her previous River City incarnation, it just felt like the time was right. Besides, if Doctor Who can cast Pete Capaldi twice then so can we!

“Barbara will brilliantly portray the Glasgow mix of amazing banter, inner steel and heart and soul which embodies Bernie O’Hara. We’re thrilled to have her back.”

Alison Peebles will play Isobel MacKenzie, mother of Kim Monroe (Frances Thorburn) in a storyline which explores the reality of dealing with a parent suffering from dementia.

Also making a return to River City is Holly Jack who reprises her role as Nicole Brodie. Having left Shieldinch in 2014 for a new life in Aberdeen with her baby daughter, Nicole is back with a bang in episodes which air in October. She might be all grown up but Nicole’s still a drama seeker, leaving her Uncle Gabriel (Garry Sweeney) the seemingly impossible task of taming the firestarter that is Nicole Brodie.

Tom Urie also makes a one-off appearance in a future episode when the not-so-Big-Bob goes back home to Shieldinch. Having shed over 19 stone, Bob returns for an O’Hara family gathering which tests family ties to the limits.

“In Lindsay Campbell and Zindzi Hudson we have two of the brightest rising stars and, of course, the amazing Holly Jack is coming back as the fiery Nicole Brodie and there’s a special appearance from the much-loved Tom Urie. Exciting times ahead for River City!”
Posted by JD at 13:11