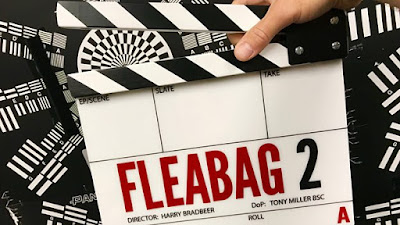 Fleabag creator and star Phoebe Waller-Bridge says: "I can’t believe they let me do this AGAIN. I’m so happy to be back with the incredible Fleabag team and I’m as surprised as anyone about where this series has taken us… thank God for Andrew Scott."

Shane Allen, Controller Comedy Commissioning at the BBC, says: “The series two scripts are knockout - sparkling with Phoebe’s unique voice that combines a whip smart complexity of character with pin sharp funny lines scattered everywhere. The themes of this series are very distinct from the first series which delivers on the challenge Phoebe set herself. It’s a superb team and cast from top to bottom and with Fleabag you can never escape a reference to the bottom.”

Two Brothers Pictures say: “We are beyond thrilled to be back in Fleabag’s company. Phoebe has created a show that’s so well loved, we can't wait for fans to see what she has in store this time around.”

Fleabag launched as BBC Three’s most popular and acclaimed show of 2016 and has since gone on to sweep the boards at awards ceremonies in 2016 and 2017 winning a BAFTA, two Royal Television Society awards, two Broadcast Awards and a British Press Guild Award, among a string of other accolades. Fleabag Season 1 was a Critics’ Choice TV Awards nominee for Best Comedy Series and Best Actress in a Comedy Series.

Since series one aired, Phoebe Waller-Bridge has played the role of L3-37 in Solo: A Star Wars Story, and has adapted and executive produced two-time Emmy Award nominated series Killing Eve from the novellas ‘Codename Villanelle’, which launched to widespread acclaim in the US earlier this year and will be available in the UK on BBC One and BBC Three soon.

Fleabag is written by Phoebe Waller-Bridge and directed by Harry Bradbeer. The producer is Sarah Hammond, and executive producers are Phoebe Waller-Bridge, Harry Bradbeer, Lydia Hampson and Jack and Harry Williams for Two Brothers Pictures. The Commissioning Editor for the BBC is Kate Daughton. The series was ordered for BBC Three by Controller Damian Kavanagh and Controller of Comedy Commissioning Shane Allen.

Email ThisBlogThis!Share to TwitterShare to FacebookShare to Pinterest
Labels: Fleabag