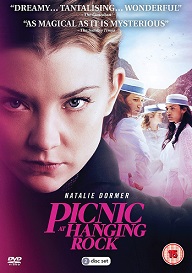 Picnic at Hanging Rock is out on DVD on 20th August 2018. And to celebrate we have a great competition for you and 3 copies on DVD to give away.

Peter Weir’s seminal, haunting big screen adaptation gained global critical acclaim following its release in 1975 and now a trailblazing new series is set to re-tell the story of the mysterious disappearance of three schoolgirls and their governess in 1900s Australia.

On Valentine’s Day, a group of schoolgirls from Appleyard College take a day trip to dark and brooding Hanging Rock. When three girls and their governess go missing during the picnic, the event rocks not just the school, but the whole town. Theories abound, dangerous secrets are exposed and hysteria sets in, until eventually, the lives of all involved unravel.

Terms and conditions
1. Closing date 27-08-18
2. No alternative prize is available
3. When the competition ends as indicated on this page, any and all entries received after this point will not count and emails blacklisted due to not checking this page first.
4. Winners will be chosen randomly and will be informed via email.
Posted by JD at 08:06

Email ThisBlogThis!Share to TwitterShare to FacebookShare to Pinterest
Labels: Picnic at Hanging Rock