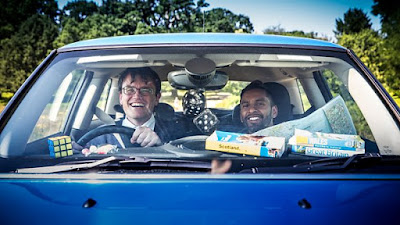 University Challenge's Eric Monkman and Bobby Seagull will travel up and down the country in search of Britain’s most remarkable scientific and technological achievements for their first TV series.

Monkman and Seagull's Genius Guide to Britain (4x30') is made by Label1, makers of RTS-winning and Bafta-nominated series Hospital.

Feeding their insatiable appetite for knowledge, the Cambridge graduates and best friends will drive off the beaten track through England, Wales, Scotland and Northern Ireland to find the hidden gems of British ingenuity.

From Sir Hiram Maxim’s Captive Flying Machines to the world’s smallest museum in a phone booth, and from the Titanic’s little sister (used to ferry people to the ill-fated passenger liner) to the science of the deep-fried Mars bar, their road trip will showcase an assortment of remarkable inventions whilst giving the duo the opportunity to share their pearls of wisdom along the way.

Abigail Priddle, BBC Commissioning Editor, Specialist Factual, says: “We are thrilled to be able to join Eric and Bobby on their intellectual journey around Great Britain as they visit some of the scientific and technological gems of our nations, bringing with them their own special brand of insight on everything from time travel to Beethoven’s fifth to biscuits.”

Eric Monkman, says: “Curiosity is an approach to life. The more you know, the more you realise you don’t know. My admiration for British genius is one of the major factors that led me to study in the United Kingdom. I am fortunate to now have the opportunity to see more of your beautiful country. I look forward to learning more about Britain’s scientific discoveries and to sharing what I learn with everyone."

Bobby Seagull, says: "The beauty of our friendship is that we’re both driven by the same thing… a curiosity about the world. We obviously faced off on University Challenge. Eric defeated me… but I’ve forgiven him now!”

Lorraine Charker-Phillips, Head of Programmes, Label1, says: "We are delighted to be making this series with such engaging new talent. Bobby and Eric are kind, sincere, and very smart. We hope their warm on-screen dynamic will encourage knowledge-hungry viewers to join them on their journey through our nation's most unusual and enigmatic technological and scientific achievements".

Monkman and Seagull's Genius Guide to Britain (4x30') is made by Label1. The series producer is Merle Currie and the series director is Sam Palmer. It is executive produced by Label1 co-founders Lorraine Charker-Phillips and Simon Dickson. It was commissioned by Patrick Holland, Controller of BBC Two and Tom McDonald, Head of Commissioning, Natural History & Specialist Factual. The Commissioning Editor is Abigail Priddle.
Posted by JD at 13:15

Email ThisBlogThis!Share to TwitterShare to FacebookShare to Pinterest
Labels: Monkman and Seagull