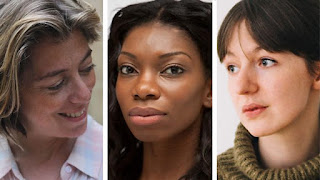 Piers Wenger, Controller of BBC Drama, has today announced Nicole Taylor will pen emotional thriller The Nest for BBC One, while Michaela Coel - who is due to give the MacTaggart Lecture at Edinburgh TV Festival this evening, is writing a landmark drama for BBC Two Jan 22nd (w/t), and Sally Rooney will be adapting her forthcoming novel Normal People for BBC Three.


Wenger says: “I am honoured to be today announcing three brand new and contrasting dramas for BBC One, Two and Three.

"To BBC One comes The Nest. Nicole Taylor’s talent for creating complex, compelling characters and for getting deep under the skin of modern Britain will make The Nest one of next year’s most thrilling and provocative dramas. We feel enormously fortunate to be working again with Sue Hogg and Nicole, the world class writing and producing team behind Three Girls - their track record speaks for itself...

"Over on BBC Two, I am thrilled to announce the BBC is working with Michaela Coel on her next project for television. Jan 22nd (w/t) will be must-see TV for anyone with an interest in modern gender politics or anyone who is struggling to get to grips with the new rules of sex and dating. We are enormously lucky to have a writer-performer of Michaela's courage, vision and wisdom to help us navigate such complex and confusing terrain. This is something really special.

"Finally, on BBC Three, Sally Rooney will be adapting her forthcoming novel Normal People for the channel. Sally is fast becoming the voice of her generation and the BBC is thrilled to be working with her on her first piece for television. Normal People is a beautifully crafted story of love and friendship. It was a thrill to read it ahead of publication, and see how she has started to adapt this story of millennial angst for BBC Three.”

The Nest is a six-part fictional drama that explores the consequences of a pact between a wealthy couple and a teenage girl that changes all of their lives forever.

Dan and Emily are crazy about each other. They live in a huge house in the nicest part of Glasgow and want for nothing. All that’s missing is a baby - and they’ve been trying for years. Through a chance encounter they meet Kaya, an 18 year old from the other side of the city, whose life is as precarious at theirs is comfortable. When Kaya agrees to carry their baby, it feels like they were meant to meet but was it really by chance?

Who is Kaya and what has brought her to this couple? Can the dreams of Kaya, Emily and Dan be fulfilled or have all three embarked on a relationship of mutually assured destruction?

The Nest is an emotional thriller about love and money, and the price of being able to buy whatever you want.

Writer, Nicole Taylor, says: “The Nest forces an emotionally combustible confrontation between two Glasgows - and it’s the story I’ve wanted to tell all my life. I’m so excited to continue my collaboration with executive producer Sue Hogg and to be bringing my first original series to BBC One.”

Charlotte Moore, Director of BBC Content, says: "Following the game changing Three Girls, Nicole Taylor returns to BBC One with her first original fictional drama series that will take audiences on a rollercoaster ride of emotions as it delves into surrogacy."

Susan Hogg, Head of Drama, Studio Lambert, says: “Having worked closely with Nicole on Three Girls and The C Word for the BBC, I am beyond excited to be collaborating once more with such an extraordinary talent. The Nest is a thrilling exploration into how we live now. Nicole has created a fascinating cast of characters in a breathtaking story which promises to take the audience on an emotional roller coaster. The Nest will be both challenging and hugely entertaining.”

This fearless, frank and provocative series explores the question of sexual consent in contemporary life and how, in the new landscape of dating and relationships, we make the distinction between liberation and exploitation.

Set in London, where gratification is only an app away, the story centres on Arabella (Coel) whose raw and personal experience of consent sits at the heart of the story. Through Arabella we meet a group of fictional friends and colleagues whose sexual adventures frequently collide with a world in which new codes of sexual practice are emerging...

Creator, Michaela Coel says: “I feel weirdly overwhelmed and honoured to be making something again, something I’m making myself, with a great team.”

Patrick Holland, Controller of BBC Two, says: “Michaela Coel is a unique talent and her writing for this drama explodes from the page. It promises fearless, provocative and gripping storytelling exploring one of the defining issues of our times. I am absolutely delighted that Michaela is bringing this to BBC Two.”

Phil Clarke, Executive Producer, says: “It’s incredibly exciting to be working with Michaela again. She has a brave and original vision, something mature and relevant to say; about gender politics, about consent, about gratification, about social media, about her generation. It’s an explosive package.”

Normal People is an exquisite, modern love story about how one person can unexpectedly change another person's life and about how complicated intimacy can be. Over several years, we follow Marianne and Connell - both from a small west of Ireland town, but from very different backgrounds – as they embark on an on-off romance that starts at school and continues through college, as they test their relationship, experiment with other partners and explore different versions of themselves.

The book is full of all the awkwardness, humour and confusion that accompanies love and sex and offers the opportunity to make a television show about being young that is frank, smart and intoxicating.

Sally Rooney, says: “I feel very privileged to be working with such an extraordinary team on the adaptation of “Normal People.” I’m looking forward to the challenge of working in a new form, and of thinking about these characters and their lives in new ways.”

Normal People will be directed by Irish film director Lenny Abrahamson who said: “Sally is a writer of the highest calibre and in ‘Normal People’ she captures the ebb and flow of intimacy and desire with extraordinary skill. I’m proud to be part of bringing her work to the screen audience it deserves.”

Ed Guiney of Element Pictures, says: “Sally’s novel is a beautifully written, utterly beguiling exploration of an incredibly intense love story, the subtlety and specificity of which is breathtaking . There is no better film maker than Lenny Abrhamson to realise its potential for the screen. We are delighted to help bring this brilliant project to life.”

Damian Kavanagh, Controller of BBC Three, adds: “At BBC Three we are 100% committed to providing a platform for fresh contemporary new voices like Sally Rooney. Her new novel Normal People is a wonderfully brilliant depiction of young love, friendship and the journey towards adulthood and I cannot wait to see how Sally, Lenny Ed and the team bring it to life on screen for the BBC Three audience.”

Winner of the 2017 Sunday Times Young Writer of the Year Award, Sally Rooney’s debut novel Conversations with Friends was the Guardian, Observer, Daily Telegraph and Evening Standard’s Book of the Year, alongside one of Vogue’s 10 Best Books of 2017. Normal People will be published by Faber & Faber in September 2018 and has been longlisted for the Man Booker Prize 2018.

Normal People will be produced by Element Pictures for BBC Three.