Stephen Buchanan has been announced as the winner of the BBC New Comedy Award 2018. 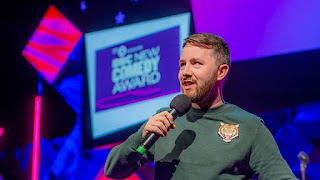 Six acts competed in the final of the competition, which was hosted by Mark Watson at the Edinburgh Fringe and broadcast live on BBC Radio 4 on Sunday evening from 6.15pm. An expert panel of judges, comprised of Mark Steel, Rachel Parris and Radio 4’s Commissioning Editor for Comedy Sioned Wiliam, came together to crown the next winner. Lost Voice Guy, aka Lee Ridley, who won the award in 2014, returned to perform a special set on the night.

Scottish comic Stephen took his debut solo show to the Edinburgh Fringe this year, exploring his darkest fears, from commitment to children's literature. On winning the BBC New Comedy Award, Stephen says: “I’m really shocked, it hasn’t quite sunk in yet. It’s been an incredible experience to take part in this competition - to get to the final and actually win it was amazing. Shout out to my mum who was the one screaming all the way through."

Sioned Wiliam, BBC Radio 4’s Commissioning Editor for Comedy and judge of the BBC New Comedy Award final, says: “This year’s New Comedy Award finalists were all incredibly strong candidates, each with their own distinctive voice. All six performers were wholly deserving of their place in the final. In the end, Stephen impressed us with his wonderfully original material and professional style. It was a faultless performance and he is absolutely a worthy winner. I’m really proud that Radio 4 is able to provide a platform for exciting new comedians to launch their careers, and I’m looking forward to hearing more from all six finalists in the near future.”

Mark Watson, who once again hosted the final, says: “It was such a strong final and there’s a lot of pressure on all the acts because you’re live on Radio 4 and there’s a real sense of danger! All of the finalists dealt with it really well. Stephen had a great gig - he was really strong and a very popular winner.”

In addition to the much sought-after accolade, Stephen takes home £1,000 and a 15-minute script commission from BBC Studios. Stephen and his fellow finalists will also be mentored by the BBC Studios comedy team across the year and receive advice, guidance and the chance to write for and appear in slots across the BBC.

More than 600 hopefuls applied for this year’s competition, with just 50 making it through to one of the six regional heats held across London, Manchester and Cardiff in June. Ten of the best acts from the heats were put through to the semi-finals, also held at the Edinburgh Fringe.