Tom Daley to explore surrogacy for new BBC One film 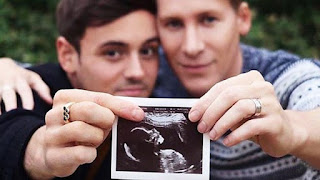 With the recent arrival of his baby son, BBC One has commissioned a single film, Surrogacy (w/t) with Tom Daley, to be made by Raw Television.

When Tom announced he was having a baby with his husband Dustin Lance Black, he became one of a growing number of parents who are having children through surrogacy.

Tom is an 'expert through experience' and now, in this hour-long film, he and Lance are setting out to examine a modern phenomenon that they have a strong personal connection to.

First, Tom will explore how surrogacy works in the UK, where it’s illegal to advertise for or pay surrogates except for reasonable expenses.

He’ll also travel to California, where commercial surrogacy, complete with contracts between surrogates and want-to-be parents, is much more the norm. His journey will also take him to one of the European countries where surrogacy is totally illegal.

Tom wants to find out why some women are prepared to become surrogates. He wants to explore the extraordinary relationships that develop between those wanting to become parents and their surrogates. He wants to meet the people who oppose surrogacy, asking why they want to stop people like him and Lance having a child via a surrogate. And, with commercial surrogacy currently illegal in the UK, he’ll meet those who want to change the country’s laws.

Throughout his journey Tom will question whether the American or British system works best and whether surrogacy in the UK needs updating in any way.

Tom McDonald, BBC Head of Commissioning, Natural History and Specialist Factual, says: "Surrogacy is one of the most complex issues in modern society and the laws which govern it are radically different across the world. As new fathers through surrogacy, Tom and Lance are both committed to exploring all of the nuances around this very emotive subject. I'm thrilled that Tom is going to be our guide in this deeply personal and intelligent film."

Surrogacy (w/t) is a Raw Television production for BBC One. The executive producer is Tom Barry. It was commissioned by Charlotte Moore, BBC Director of Content, and Tom McDonald, Head of Commissioning, Specialist Factual.