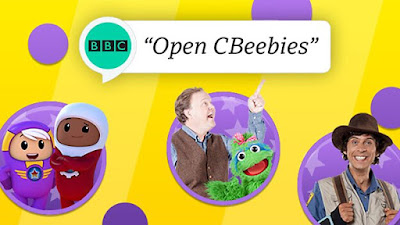 Children and adults can simply ask their smart speaker to “open CBeebies” and can choose which game they want to play. Whether it’s dancing and singing along with Andy from Andy’s Prehistoric Adventures, playing hide and seek with Justin Fletcher and Little Monster from the hugely popular CBeebies programme, Justin’s House or helping Go Jetter’s Foz unscramble Grandmaster Glitch’s funky facts, children can interact with their favourite CBeebies’ characters in fun new ways:

Andy’s Adventure Dance PartyLittle ones are invited to Andy’s dance party where they can choose to dance along to songs about animals, dinosaurs or prehistoric creatures, or ‘roar’ to have Andy pick a song for them. Andy teaches little ones dance steps before rapping about one of the creatures, allowing children to sing and dance along.

Go Jetter’s Glitchy FactsChildren can train to become a Go Jetter with Foz at the Go Jet Academy by passing Ubercorn’s Funky Fact Quiz. Foz gives little ones two options, and then players have to listen carefully to Ubercorn’s facts to decide which option they are describing.


CBeebies fans can look forward to other voice experiences featuring their favourite programmes and characters over the coming months. Voice content from a wider variety of children’s content will also be coming to the service in the future.

Mukul Devichand, Executive Editor, BBC Voice & AI, says: "Interacting with audio opens up a world of exciting opportunities to explore for the BBC’s content for children. Starting with CBeebies, we are going to release a number of pieces for children over the coming months, working closely with the much-loved characters and stories. The technology is still new and we’re experimenting with what works well and what our audiences really want on these new platforms. High quality content for children is key to the BBC's public service goals and we are really excited about achieving that in this new medium.”

Andy Webb, Head of Voice & AI Products, BBC Design & Engineering, says: “We want to bring world-class public service audio to our audiences wherever they want it. People are increasingly using voice platforms and smart speakers, and we’re looking at how to best serve them. We’ve made excellent progress with our BBC voice service, bringing live radio and podcasts to these devices, and now we’re looking at how to make the most of the interactivity they offer. The BBC Kids Skill is a great example of this.”
Posted by JD at 16:04